A photo of on-screen couple Jin Goo and Kim Ji Won was revealed through the official “Running Man” Instagram account with the caption, “Running Man Episode 297 ‘Goowon Couple Special’ [After the Sun Sets (a parody of “Descendants of the Sun” in Korean)] Filming in Incheon with guests Jin Goo, Kim Ji Won, David McInnis, and Cosmic Girls Eunseo.” 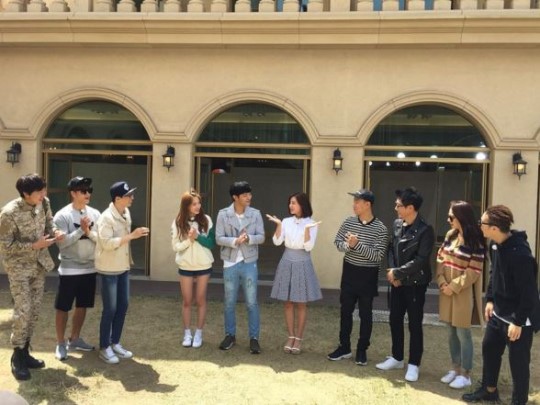 The guests and the members are seen talking brightly with one another while Lee Kwang Soo wearing a “Descendants of the Sun” military uniform is also eye-catching.

Actors Jin Goo and Kim Ji Won, famous for portraying a military couple on “Descendants of the Sun,” are appearing on SBS’s “Running Man.”

A broadcasting affiliate revealed on April 24, “Jin Goo and Kim Ji Won will be participating in the April 25 filming for ‘Running Man.’”

David Lee McInnis, who played the role of Argus in the drama, will also be making an appearance.

After moving the hearts of viewers through their on-screen romance in “Descendants of the Sun,” interest is growing on what charms they will show on a variety program.

Jin Goo and Kim Ji Won will be appearing on the May 1 broadcast of the show.