Jin Goo Is In A Murderous Rage In New “Untouchable” Preview

In the stills revealed, Jin Goo sits alone, handcuffed in an interrogation room. He is unable to repress his anger, his furious gaze bringing out a murderous aura. In another scene, Park Won Sang holds him back and attempts to calm him. 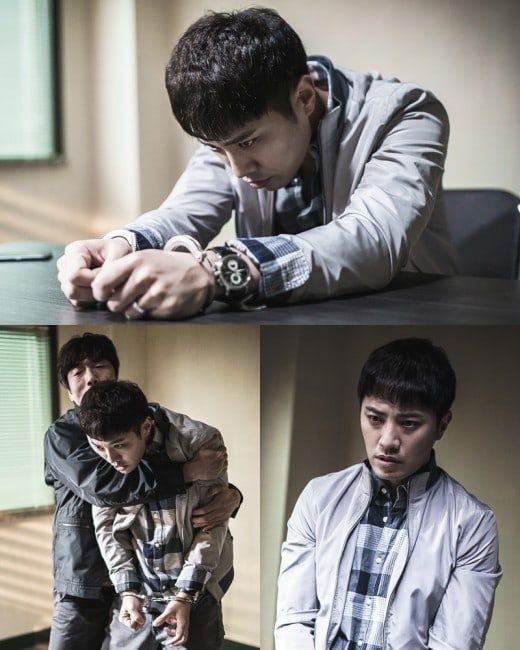 Previously, in the last few episodes, Jang Jun Seo (played by Jin Goo) began his investigation into his wife Yoon Jung Hye’s (played by Kyung Soo Jin) death. He found the driver Kang Moon Shik (played by Kim Ji Hoon), who hit Jung Hye’s car with his own, causing her death. Jun Seo eventually chased him down and questioned him. To provoke Jun Seo, Kang Moon Shik stated that he had been in a common-law marriage with Jung Hye, and Jun Seo, in his fury, assaulted him. The police arrived on the scene, and an ambulance rushed Kang Moon Shik to the hospital. However, he did not survive the ride, implicating Jun Seo as a murderer.

A source from the drama commented, “With his passionate gaze, Jin Goo acted his scenes with such conviction that his wrists became red and swollen from the handcuffs. Viewers will be able to immerse themselves even more into the drama as Jin Goo attempts to shed the unfair charges against him.”

“Untouchable” is a drama about two brothers who go down very different paths as one investigates the death of his wife and the other struggles to protect their family’s power. The drama airs every Friday and Saturday at 11 p.m. KST.