On the February 11 broadcast, the actress appeared as a guest and attempted to solve challenging questions on the show.

Jin Ji Hee, who is a student of the Department of Theater and Film at Dongguk University, surprised the cast by revealing that she received straight A’s and is ranked at the top of her department.

Describing her dedication to school, she said, “At the time, filming ended at dawn. Because I had a school exam at 8 a.m., I slept for about an hour at home and went to school early to take the final exams.” She continued, “There are unavoidable circumstances when I have to miss school because of filming. I realized that I remember things for a longer time when I directly ask the teacher about something I don’t know.”

When asked why she chose to be ambitious about her studies when she could just focus on acting, Jin Ji Hee replied, “I didn’t like people having stereotypes like, ‘She probably isn’t good at studying because she’s an actress.’ I wanted to break that wall, so I studied harder.” After looking at her notes, MC Jun Hyun Moo commented, “This is the handwriting of a typical top student.” 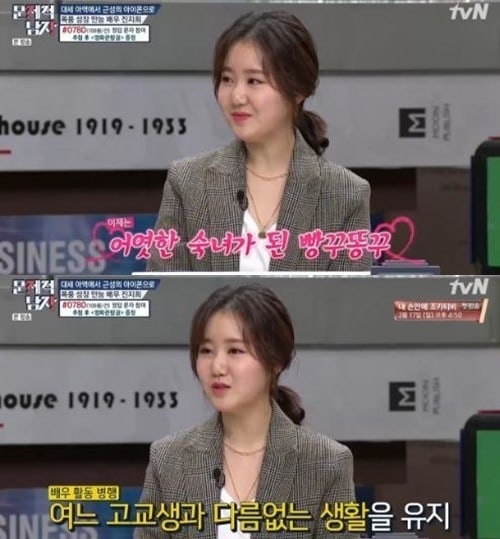 “Problematic Men” airs on Mondays at 11 p.m. KST. Check out Jin Ji Hee in her latest film “The Star Next Door” now!