With SBS’s Monday-Tuesday drama “My Strange Hero” nearing its end, new stills have been released to show how things may go.

“My Strange Hero” tells the story of Kang Bok Soo (Yoo Seung Ho), who is expelled from his school on allegations of school violence, but returns nine years later to get his revenge. In the process, he reconnects with Son Soo Jung (Jo Bo Ah), his first love from high school and now a teacher. Not only do they kindle a romance together, but they also fight to save their school and the students.

The previous episode exposed Im Se Kyung (Kim Yeo Jin) and her grand corruption scheme thanks to Kang Bok Soo and Son Soo Jung’s testimonies. Cornered and facing jail time, Im Se Kyung claims ownership of Seol Song High School and threatens to close it down. To avoid shutting down the school, Oh Se Ho (Kwak Dong Yeon) strikes a deal with her and falsely states that he was behind all of the corruption.

The new stills show Yoo Seung Ho and Jo Bo Ah standing in front of Seol Song High School in a group protest. They are joined by students, teachers, and parents as they all hold a protest to stop the school from shutting down. Im Se Kyung attempts to break up the group, backed by a group of men wearing suits, but the protestors form a human barrier and do their best to stop her. When Kang Bok Soo arrives with the students, he hands Im Se Kyung something mysterious. 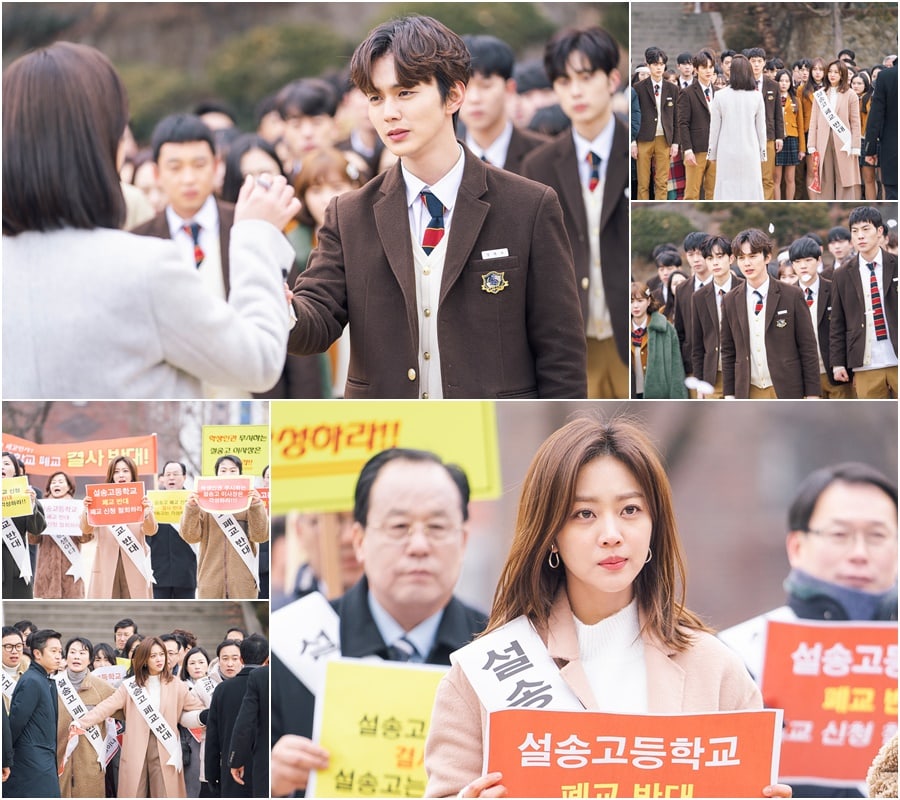 The production staff stated, “The previous episode followed Bok Soo and Soo Jung as they uncovered corruption in their school, but that excitement was short-lived as they face the prospect of their school getting shut down. We hope viewers will keep watching to see if Bok Soo will be able to save the school.”

The reveal of what Kang Bok Soo handed Im Se Kyung, and whether he’ll be able to save the school, will be revealed in the upcoming episode of “My Strange Hero,” which will air on February 4 at 10 p.m. KST.