Jo Jung Suk Talks About Acting As A Villain, Working With Ryu Jun Yeol And Gong Hyo Jin, And More

Jo Jung Suk recently participated in an interview to talk about his newest movie “Hit-and-Run Squad.”

“Hit-and-Run Squad” is about a hit-and-run police task force that chases an out-of-control businessman who loves to speed. Jo Jung Suk will play the role of the troublesome businessman Jung Jae Chul. With this character, the actor is taking on his first villainous role.

First off, the interview mentioned how the audience reacted very excitedly during the conference after the movie preview. Jo Jung Suk showed his amazement as well, saying, “It’s been a while since I’ve seen that. It was the same kind of cheering I received for ‘My Annoying Brother’ when I was with [EXO’s] D.O. This is all due to Ryu Jun Yeol‘s popularity.”

When asked why he decided to act in “Hit-and-Run Squad,” he gave all the credit to director Ha Joon Hee. The actor praised, “On the set, I told the director that he was an ‘artistic weirdo’ because he is a director who is good at drawing out unique and unfamiliar feelings and points. He also likes that kind of thing. From an actor’s perspective, he’s a great director because he brings out things we didn’t expect before and implements them.”

Jo Jung Suk also talked about the hardships of acting as a villain for the first time. He commented, “When I first received the script, I felt like the character was a very strange person. I experienced struggles and difficulty in acting. There was a part in the scenario where I had to start stammering, so the director and I had to worry a lot about putting the scenes in the right place technically, as it could cause frustration to audiences and disrupt the delivery of the lines.”

He continued, “I received an idea about how to stammer by a friend who actually stammered during high school. I heard that stuttering is the biggest problem in the diaphragm. I tried to bring out certain details where I had to sigh and breathe some more due to frustration from poor circulation.”

Jo Jung Suk shared details of what kind of villain his character Jung Jae Chul is like. He said, “He’s a strange character. If there is anything wrong with what he wants, he is always willing to do anything for it. In a way, he seems completely narcissistic. The subtext explains what Jung Jae Chul is like. He grew up in a very bad family background in the past and fell in a bad direction. He continues to go down the wrong path because he never wants to lose his the achievements, and he tries to survive by solving problems with money. He didn’t make his money the right way, but now that he’s made it, he doesn’t want to go back to the past.”

Then he added, “At first, I thought I couldn’t understand him because I was so different from him. While acting, I needed to understand this character, so I kept reading the script, and I eventually came to understand him. I thought such a person would be able to ruin his own car. Jung Jae Chul would not care about wrecking a car when he’s more concerned about being embarrassed and hurting his self-esteem.”

The actor revealed, “I didn’t know when I was shooting the movie, but the director told me in the process of interviewing for the film and conducting a preliminary investigation that there was actually this kind of person. I found this out later while we were doing our promotions.”

When asked if he studied another villain for this role, he replied, “I didn’t think of another villain. I didn’t have any reference and just acted according to my analysis. Seeing a model and trying not to follow it seems to prevent me from concentrating.”

Jo Jung Suk also shared he is very different from Jung Jae Chul. He explained, “I really like challenging and taking risks, but it’s different from his [idea] of challenging and taking risks.” Then he said, “Speaking of challenges, Ryu Jun Yeol suddenly pops up in my mind. I really like Ryu Jun Yeol. Our of all the actors his age, he is the most hard-working one, and he continues to attempt challenges and adventures.”

The actor also mentioned Gong Hyo Jin. He previously acted with her on “Don’t Dare to Dream” (Jealousy Incarnate). About working with her again, he said, “Gong Hyo Jin and I are at the point where we can know each other just by looking at each other. If we act in another romantic comedy, we will be able to do it amazingly. I think romance can be made well somehow, but comedy requires teamwork. They must be compatible. So, if we do it again, I think we can make everyone explode with laughter.” 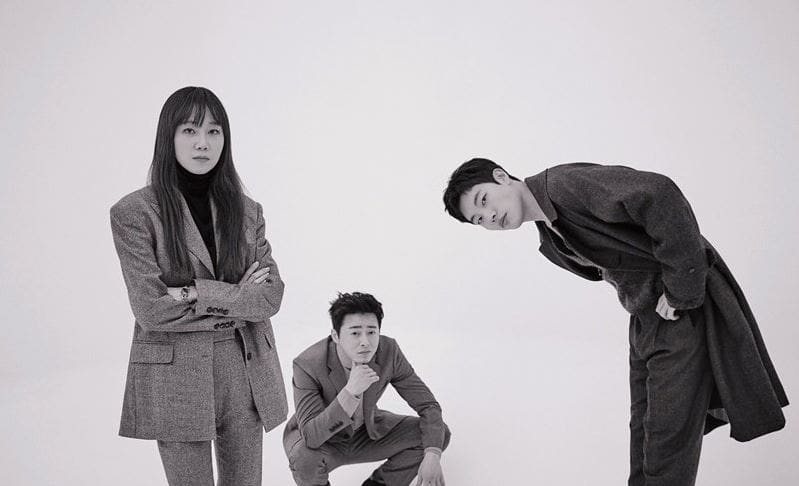 In “Hit-and-Run Squad,” there are many driving scenes, and the interviewer asked if Jo Jung Suk drove himself. The actor explained, “Almost 90 percent of the [driving] scenes were done by me. When you watch the movie, the camera shows you the front and side of me, and you can imagine that the camera car is running at the same speed, right in front of or near the speeding car. The actors were forced to take more courage and film. The scene where I had to cut in front of a car was very dangerous because it was traveling at a speed of almost 100 kilometers per hour [about 62 mph]. Since there were many close-ups on the face, the acting had to be done well.

He added, “It was like a cartoon. The cars were angry, and the faces of the people who drive are clearly visible. The director said he wanted me to drive emotionally, so I paid a lot of attention to my acting. The chasing scene in the rain with Ryu Jun Yeol was dangerous, but fortunately, the production team prepared thoroughly, so we filmed safely.”

Jo Jung Suk also revealed he practiced driving for the movie. He said, “I practiced driving the race car F3 Machine that appears at the race in the beginning [of the movie]. It was harder than I thought. The steering wheel and gear stick were coupled together and had to be manipulated and turned by hand. The driving position was unique. I had to stretch out my legs and almost be in a lying down position. That’s how I ended up driving with only my senses.”

He continued, “I heard the steering is tight and the ignition is off at first, but I never turned it off. At first, when the staff praised me, I thought they were just saying that, but the staff who returned the car later said I was cool and tough, so I felt proud. But I don’t intend to develop this talent. I’m good at driving and I’m interested in cars, but I’m not the type to enjoy speed. I’m not interested in racing, competition, or speed.

The interviewer pointed out Jo Jung Suk seemed competitive, and he admitted, “In my 20s, I was full of competitive spirit. It was amazing. Even when I played basketball in my neighborhood, my friends would give up, but I did not give up until the end and burned my passion. But time passed and changed when I was in my 30s. I would go, ‘Why are you obsessed with this?’ It changed. I’m still a bit competitive when it comes to games, darts and billiards, but I’m not like that with speed.”

“Hit-and-Run Squad” opened in theaters in Korea on January 30.