Joo Ji Hoon On His Reaction “Kingdom” Season 2 Script, Says No One Is Safe

Joo Ji Hoon, currently starring in MBC’s newly premiered drama “The Item,” teased fans about what’s to come in the second season of “Kingdom,” which premiered its first season on Netflix late January to rave reviews.

Asked to give his own rating to the Korean historical zombie series, Joo Ji Hoon said, “I want to give it 10 out of 5 stars. I’m satisfied.”

“It’s hard to tell how what the response is really like, but, even if it’s just words, it feels good hearing international reviews compare it to other successful works and say that it surpassed existing ‘K-zombie’ flicks,” said Joo Ji Hoon. “It doesn’t matter if it really surpassed [other works] or not. As someone who was a part of the project, it’s incredible that people feel that way to begin with.” 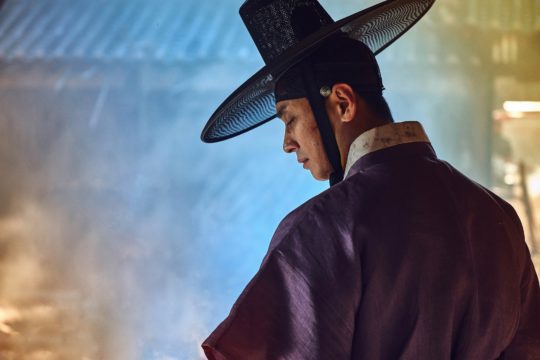 “Kingdom” is different from other zombie shows in that there are no incredibly gory or horrifying scenes. “The horror comes from emotions. When [a zombie] is about to overrun a child, the scene cuts. It’s a mental horror,” said Joo Ji Hoon, explaining that director Kim Sung Hoon didn’t want to show overly horrifying scenes. “If you watch, [the zombies] are pitiful. A mom tries to save her child, but becomes a pitiful creature that ends up [taking the life] of her [other] child. They’re hungry when they’re alive, and they’re hungry when they’re dead. It’s a zombie drama that tells the story of people’s hunger.”

As soon as he wraps filming for MBC’s “The Item,” Joo Ji Hoon will resume filming for “Kingdom” season two. The actor recalled seeing the season two script for the first time. “I was in a plane to Singapore reading the script with Ryu Seung Ryong, and I was so surprised I shouted, ‘What? Really?’” He added, “There are no guarantees that my character is going to live to the end. In season one of ‘Game of Thrones,’ the main character dies.”