SBS’s upcoming drama “Big Issue” has shared some photos from their script reading!

“Big Issue” will tell the story about a man who turns his life around from being an alcoholic homeless person to an elite photo journalist to find the cure for his sick daughter, and a heartless chief editor who uses her connections to reveal all sorts of celebrity scandals.

Joo Jin Mo was previously confirmed to take on the role of the photo journalist Han Seok Jo, and Han Ye Seul will play Ji Soo Hyun, the cold-hearted editor-in-chief at Sunday Report. 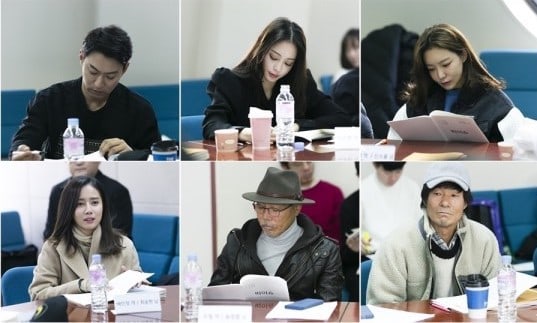 At the script reading, Joo Jin Mo was able to portray the extreme life-or-death situation his character goes through with his perfectly-controlled facial expressions. On the other hand, Han Ye Seul exuded much charisma as a chic, professional career woman and left people at the script reading in awe.

Joining the main actors is Shin So Yul. As the actress is returning to SBS for the first time in a year, she showed her determination and readiness to fully transform into her character as a journalist at Han Ye Seul’s news company, Sunday Report.

Choi Song Hyun, who will be making her first drama return in three years, will take on the role of Bae Min Jung. She is the wife of Han Seok Joo (Joo Jin Mo) who ruthlessly asks for a divorce once her husband faces a crisis due to an unfortunate incident.

On the other hand, Song Kyung Chul will act as Doo Chul, the leader of the neighborhood alley in Seoul Station. Last but not least, Oh Kwang Rok will appear as a homeless man who calls himself a doctor.

The production team said, “‘Big Issue’ plans to showcase the exciting work of paparazzi that will remind [viewers] of spies at war. Please look forward to seeing a new and exciting genre that conveys the style of caper films.”

Check out a video of their script reading below!

“Big Issue” will premiere on March 6, and it will also be available on Viki!