Previously, K-Drama Joseon Exorcist fell under fire when some of the props in on a table setting were ostentatiously from Chinese culture rather than Korean. The scene in question took place at a gisaengjib (an entertainment house for men to mingle with female artisans) located at the borders of Uiju County. Many expressed that as the county was still within the lines of Joseon, the table props including the liquor bottle and the food should have been Korean. Rather, netizens criticized the drama for “distorting history” with the presentation of Chinese mooncakes, liquor and pídàn (century eggs) on a Korean table setting.

SBS subsequently released an apology explaining that as the gisaengjib was located near the edge of Joseon and the borders of the Ming Dynasty (China’s ruling Dynasty at the point in time) they had used Chinese props to reflect that.

It was a location in which the Western exorcist’s party could rest after traveling through the Ming Dynasty and just about to enter Joseon. Since it is a region that is close to the border of the Ming Dynasty, we prepared the props while thinking that there would be frequent traffic of Chinese people

—The Production Team of Joseon Exorcist

However, it seems that the team behind the drama has once again fallen into hot soup. With the above controversy still boiling on, Joseon Exorcist‘s many advertisers have pulled out and released statements regarding the matter. Those that have pulled out include health company Ho Gwan Won, Geum Sung Beds, Ace Beds, Body Friend, Hite Jinro, LG Lifestyle and Health, KT Telecom, CJ Jeil Jedang, Banollim Foods, Samsung and more.

Ace Beds expressed through an official statement that they have recognized the issue and will be halting all advertisements related to the drama effective immediately. Amongst those that have yet to pull out of advertising and investments include LOTTE Cultureworks, YG Investment, Downy, Dyson and Simmons.

The issue does not merely lie with the inaccurate table setting. Many are upset at how the drama had overly dramaticized historical events and figures. For example, in the drama, King Taejong was seen slaughtering people due to hallucinations. Marco (the Western exorcist’s translator) used crude language to a member of the royal family, Prince Chungnyung. As King Taejong is one of the respected leaders of South Korea that helped the economy to flourish, many are upset at the portrayal.

The drama may face real danger — the final nail in the coffin may be the upcoming decision Mungyeong’s Foundation for Culture and Tourism has to make. The foundation supports various filmings and activities on location in Mungyeong, located in the North Gyeongsang Province. Currently, the foundation provides 20% of the production expenses. They are currently reviewing the issue before they make their decision to pull out or not.

In addition, Naraesol Hanbok, who has been providing sponsored clothing for the drama, released an official statement on the matter. Their first statement indicated that their hanboks were not used in any of the problematic scenes. They also reinforce the notion that the drama is categorized as “fantasy” and appeal to the public to take that into consideration. They concluded that their sponsorship was already over as well and thus are not further related with the matter. However, after critcism over their statement, they have decided to revise their statement and re-update the public later on.

For those not yet aware of the cultural rife between China and Korea, the two countries are currently deeply embroiled in arguments over the origins of many staples of Korean culture. This includes kimchi, taekwondo, the hanbok, the Korean flag and more, all of which Chinese have been claiming as being created by China. Due to this, many Koreans are highly sensitive regarding Chinese content in Korean media as well as any inaccurate portrayal of Korean culture.

Many Koreans were enraged when Chinese television programs began to showcase their people making kimchi while wearing hanboks. These programs came soon after the claims. 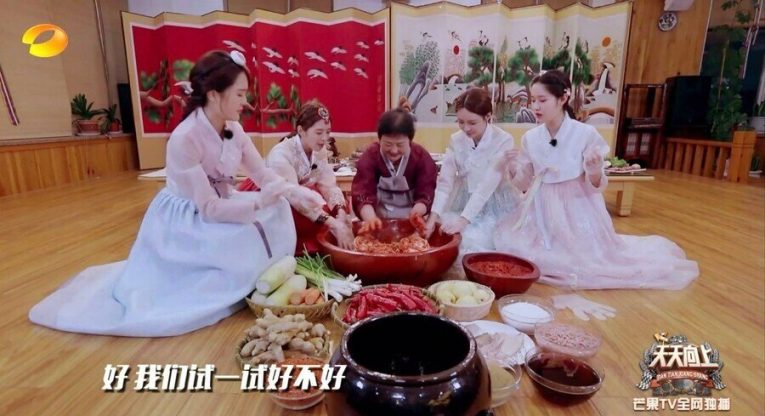 Joseon Exorcist is not the first to have fallen under critique over the matter. Previously, True Beauty and Vincenzo were also in hot soup for having allowed PPL of Chinese products in the show despite the Korean setting.