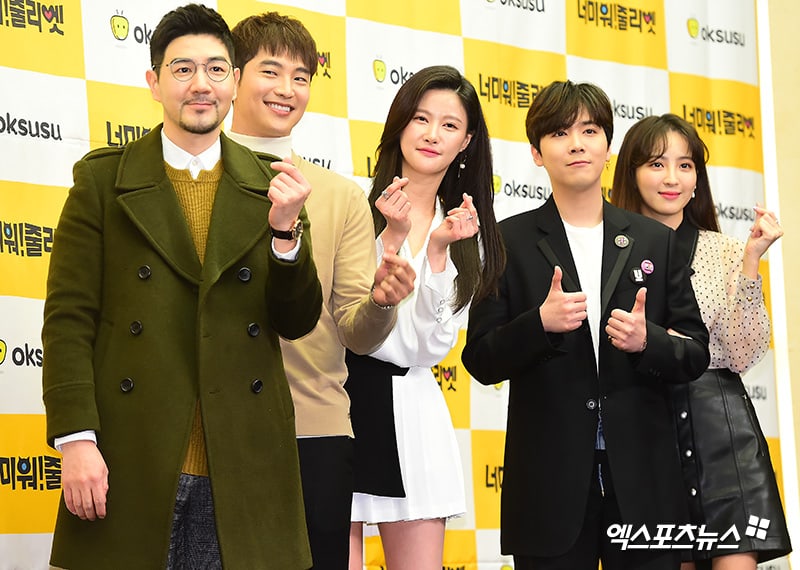 During the conference, the two actors shared their impressions of each other and talked about what it was like to work together on set. Jung Hye Sung said, “I looked at the script and wondered at some parts, but when we were on set, it just clicked and it was fun to act. He taught me a lot of trendy words because he knows them all. Stuff like that made filming pretty fun.”

She added, “There were a lot of lines that were so cringeworthy that I wasn’t sure if I could say them. But because he was such a good partner, I was able to say them without cringing.”

Lee Hong Ki said, “We used to be part of the same agency but we never saw each other. When we met for this drama, my first impression of her was ‘ice princess.’ But the truth is, she’s got a lot of energy. When I saw her get so hyped about things, it was easy to be comfortable around her.”

Jung Hye Sung had a similar first impression of her co-star, saying, “When we first met at the script read-through, he had a cool image and because I’m shy, I wasn’t sure what to do. But when we started filming, he turned out to be a warm person. He has a lot of respect for his co-stars and I got a lot of help from him during filming.”

“I Hate You! Juliet” is about a top star (Lee Hong Ki) and a student with a 4D personality (Jung Hye Sung) who start a romance while attending an arts college together. The drama premieres through SK oksusu on February 14.