Jung Hyung Don revealed how he formed a deep bond with actor Cha Tae Hyun as they both suffer from panic disorder.

Cha Tae Hyun is set to appear on JTBC’s “Package Tour Around the World” for the group’s trip to Laos. While enjoying a meal right before the flight, the actor cautiously confessed that he was concerned about the six-hour flight.

The actor revealed that he has been suffering from panic disorder, even longer than Jung Hyung Don, who took a break from the entertainment world from 2015 to 2016 due to health concerns related to panic disorders. The others were surprised to hear this, and asked him how long he’s been battling the condition, to which Cha Tae Hyun replied that he’s dealt with it since before he got married in 2006. He added, “I once went to MC a concert in the U.S. and they had to call 911 because I collapsed 30 minutes before the show. I didn’t know it was because of my panic disorder, so I thought it was angina.” 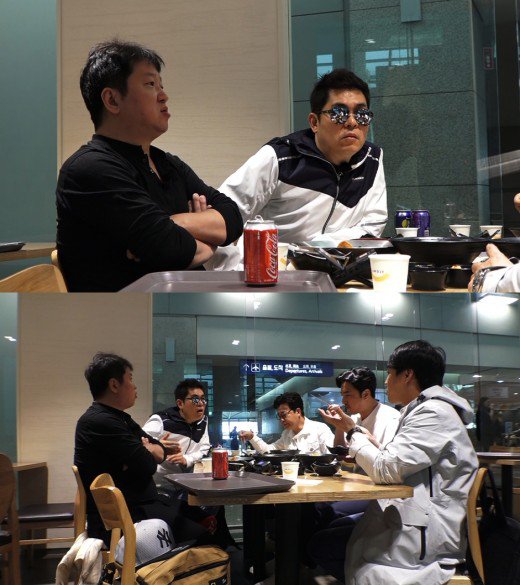 Cha Tae Hyun also revealed that when Jung Hyung Don was struggling with his own panic disorder, he left the man a book in front of his house as a gift. Jung Hyung Don explained, “I cried a lot when I saw what book he got me.” When asked why, Cha Tae Hyun replied, “The book I gave him was one that helped me a lot when I was recovering from my panic disorder. I gave it to him hoping that it would help him out.”