“Haechi” is a historic fusion drama starring Jung Il Woo as the problematic Prince Yeoning, a prince who cannot become the king. Because he was born from a common woman, he is not welcomed anywhere despite being born a genius with a brilliant mind and sharp sense of judgement. Furthermore, Go Ara will take on the role of Yeo Ji who is a fierce female inspector working for the government.

In the released stills, Jung Il Woo and Go Ara are shown facing each other. Jung Il Woo is standing in front of Go Ara, who is wearing a topknot and dressed in male clothing, as if to block her path. Viewers are curious to find out why Go Ara is looking at Jung Il Woo with a guarded expression as Jung Il Woo gives her a meaningful smile. In particular, viewers are excited to find out what kind of relationship the two will develop as sparks fly from their piercing eye contact. 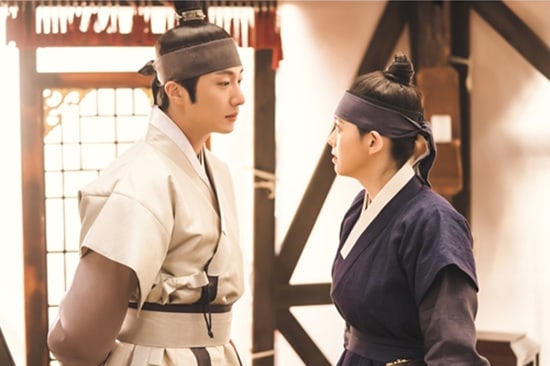 Even from the first filming, Jung Il Woo and Go Ara had to portray a lot of emotions using only their eyes. The two actors could be found monitoring their scenes after each filming, showcasing their intense focus on their roles. They also received a lot of praise when Jung Il Woo skillfully portrayed ambitious Prince Yeoning’s confident gaze and Go Ara perfectly digested her role by showcasing her character’s strong gaze.

“Haechi” will premiere on February 11 at 10 p.m. KST following the end of “My Strange Hero.” Check out the latest teaser here!