On the September 21 episode of MBC’s “I Live Alone,” Jung Ryeo Won revealed her house for the first time since her debut 17 years ago.

The cast of the show were shocked when they saw her home with plastic-covered or unfinished walls, tapes labeled “fragile” covering the windows, and cords poking out of the ceiling. Jun Hyun Moo described it as a “horror house.” Park Na Rae asked, “Do you live in a construction site?” to which Jung Ryeo Won admitted, “Yes, I do.”

Then the actress explained, “My friend is working on the interior for me. I wanted to complete it with her together, so I moved in before it could be finished. It’s been three days since I moved in. That’s why it’s messy.”

Jung Ryeo Won proved to actually be quite the expert on house renovation. She wasn’t afraid to get messy as she boldly hammered nails, purposely chipped parts of the wall, painted the ceiling, and fixed things to look as good as new. While painting, she said, “I moved about nine times in Australia and eight times in Korea. I wasn’t the owner, so there were times I had to move out even though I didn’t want to. Now I’m so happy I have my own place.” 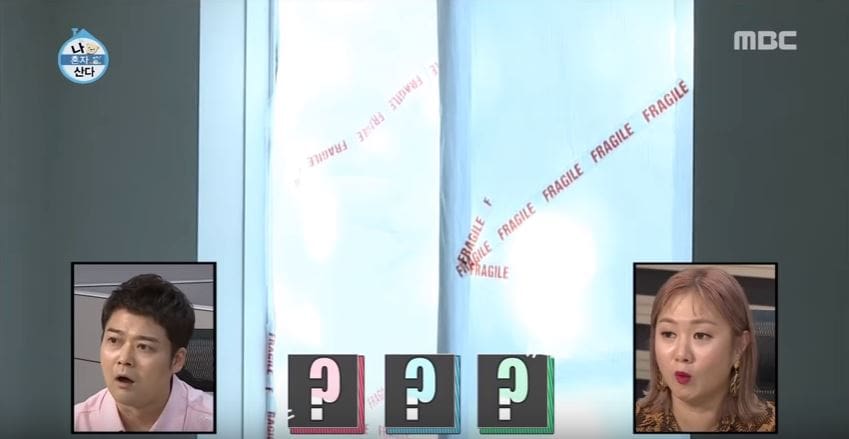 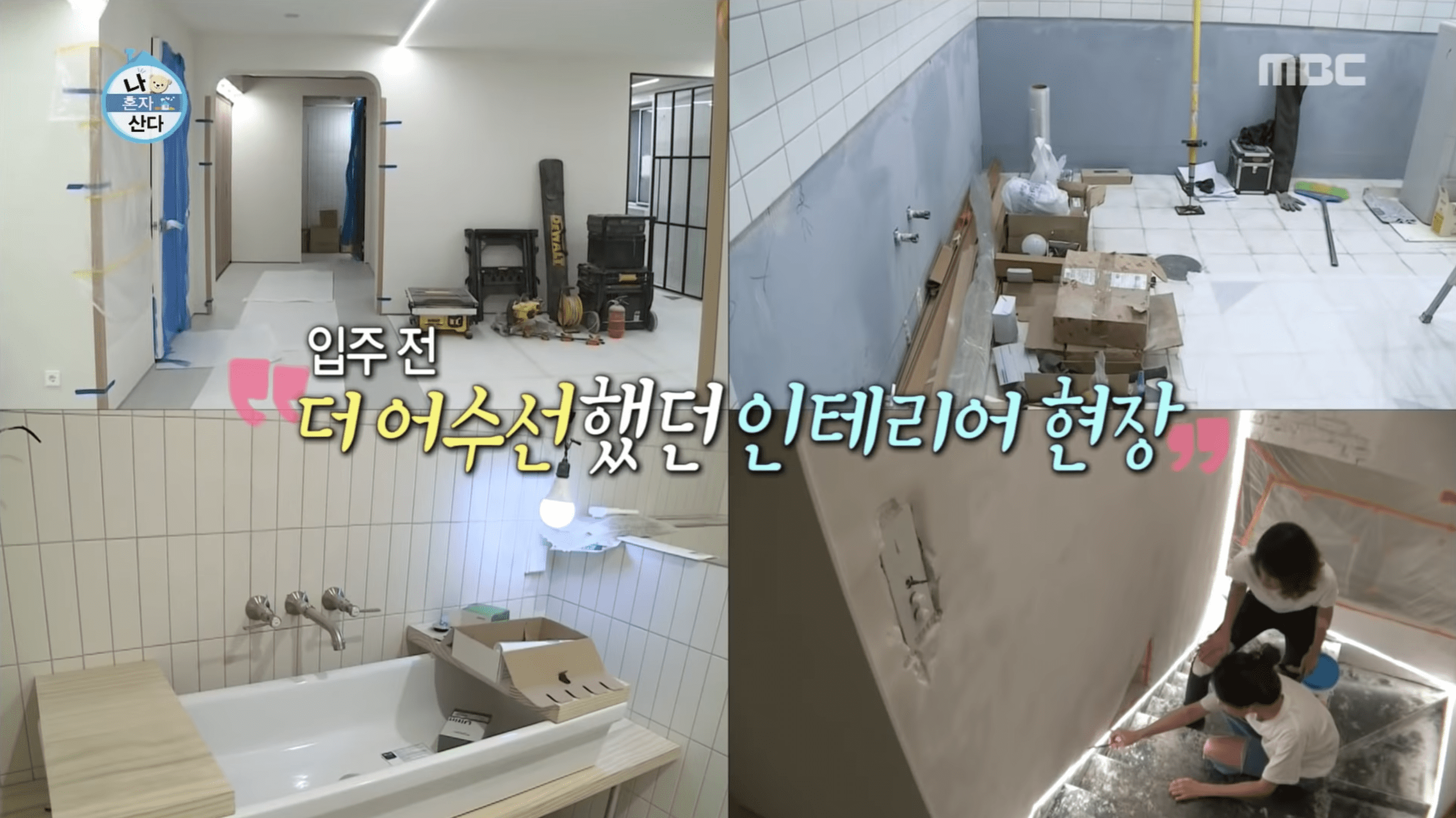 The actress also showed her life with her four cats. The cast was surprised when they saw her brushing one of her cats with a toothbrush. She explained that a cat’s tongue feels like a toothbrush, so when she brushes them with it, it feels like grooming to them. Her cats took an interest in Wilson, the stuffed bear that acts as the official mascot of “I Live Alone.” One of them rubbed its body against it while another one gave it a massage with its paws.

Jung Ryeo Won was seen adding green kernel black bean powder to her cereal for breakfast, and Jun Hyun Moo commented, “You’re losing hair!” She admitted that wasn’t the case, but she had watched him eat that for hair loss on the show once and copied him so she could prevent hair loss in the future. Then she said, “I usually eat rice in the morning, but I don’t have a stove yet, and I didn’t like my kitchen so I’m having it changed. So I have nothing right now.” 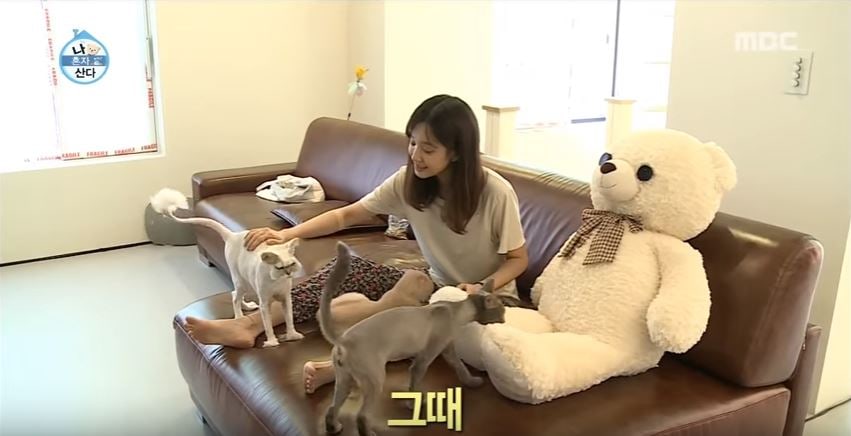 Later on, her good friend Son Dam Bi came over to join her for lunch. Jung Ryeo Won revealed that the singer-turned-actor lives only five minutes away from her. The two of them ate pork neck Jung Ryeo Won had ordered and talked about different topics that ranged from her cats to their trip to Dongmyo later that day. 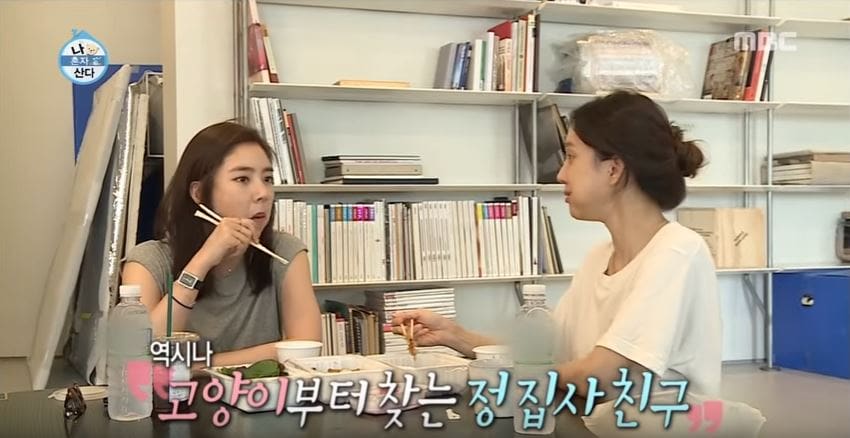 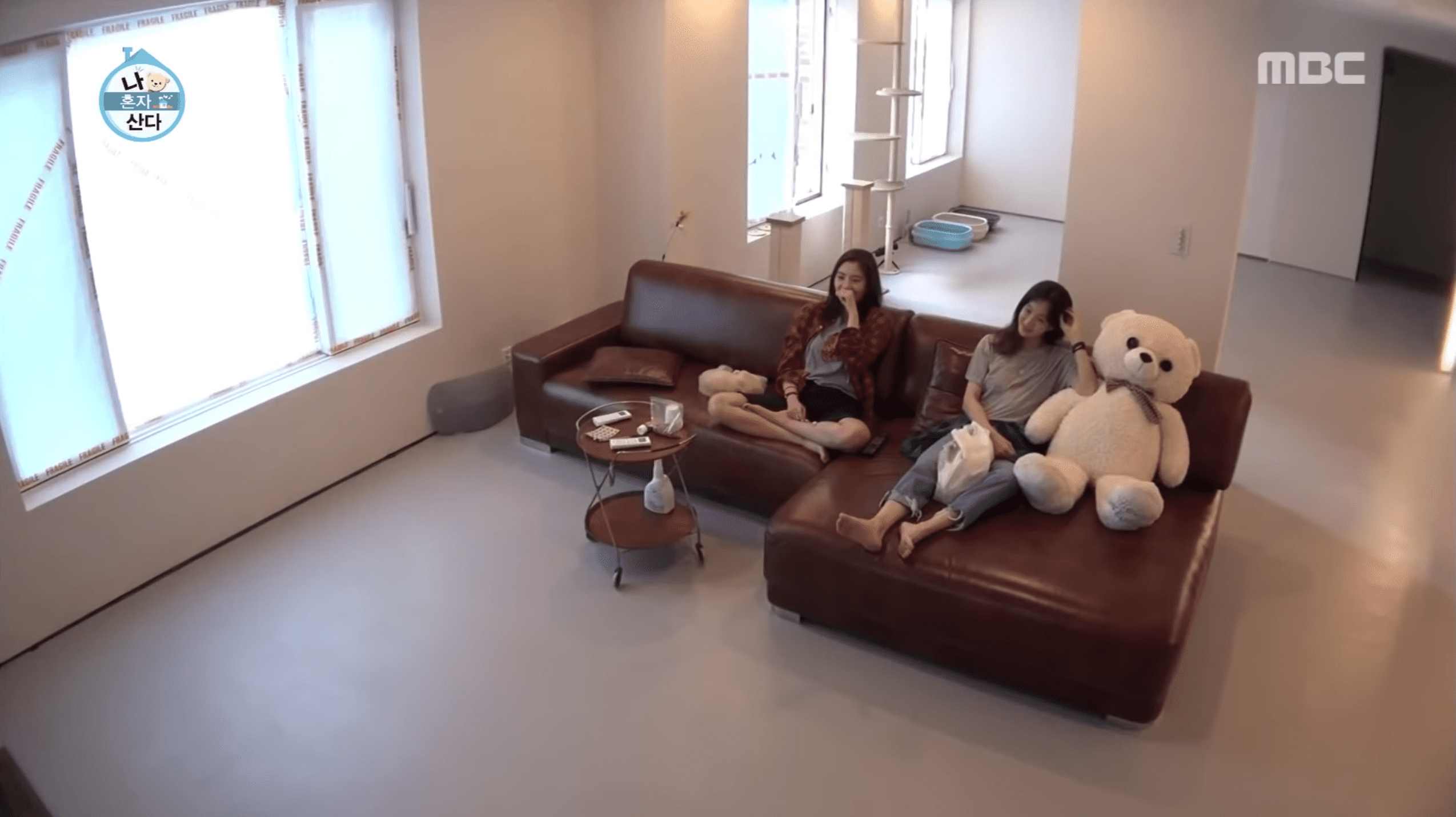 After lunch, Jung Ryeo Won went to change her clothes, revealing her huge walk-in closet in the process. Jun Hyun Moo described it as a store, and Park Na Rae compared her closet to the one Carrie Bradshaw had in the American TV series “Sex and the City.”

Jung Ryeo Won talked about the room room, saying, “My friend Soo Mi [the one in charge of the interior] and I were traveling when I saw a huge editing store. I thought, ‘It’d be amazing if I could have something like this.’ It was something I had just said without much thought, but my friend remembered that and made this for me. I thought it was a dressing room that was too extravagant for me, so I consider myself to be very blessed.” 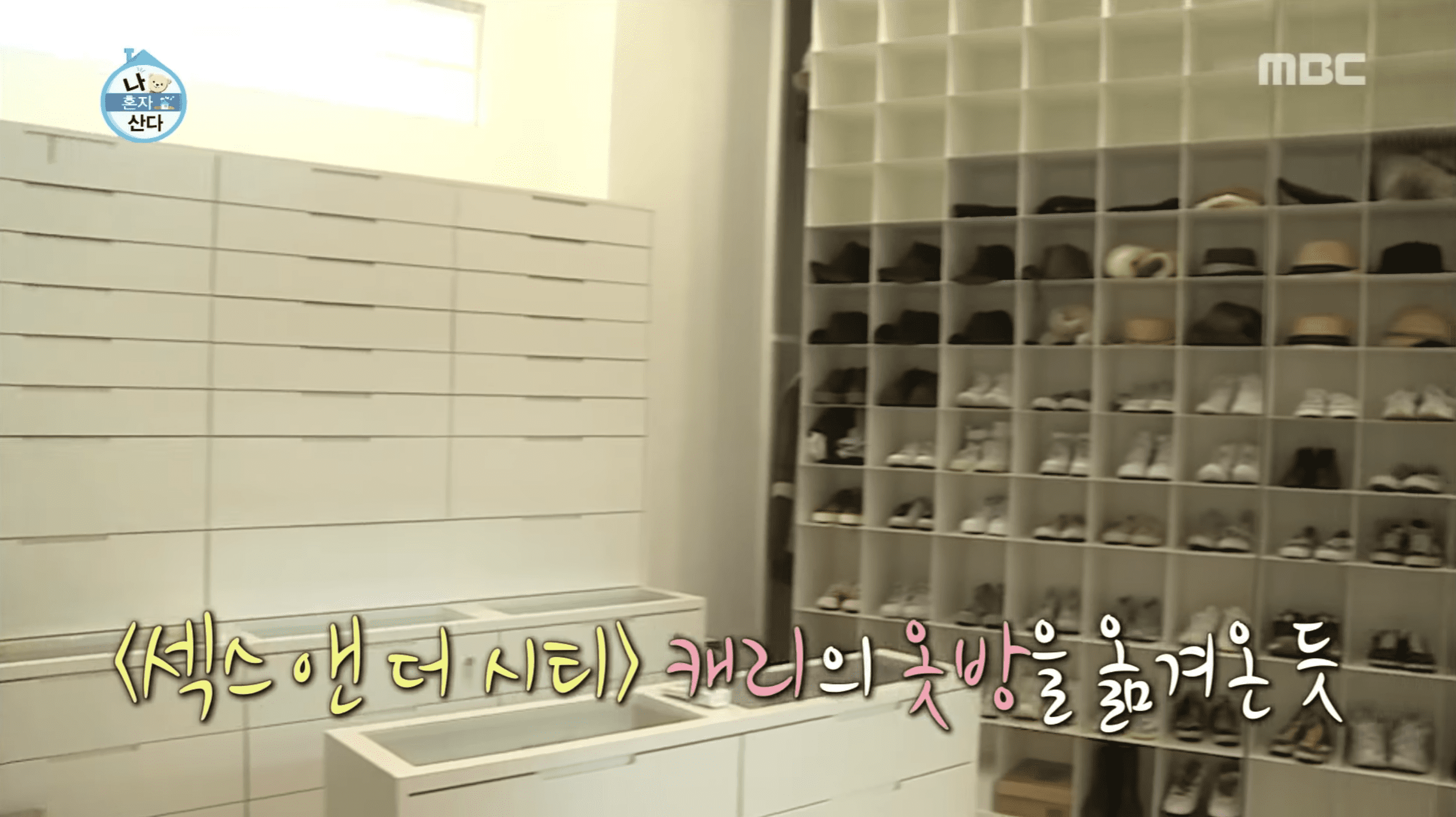 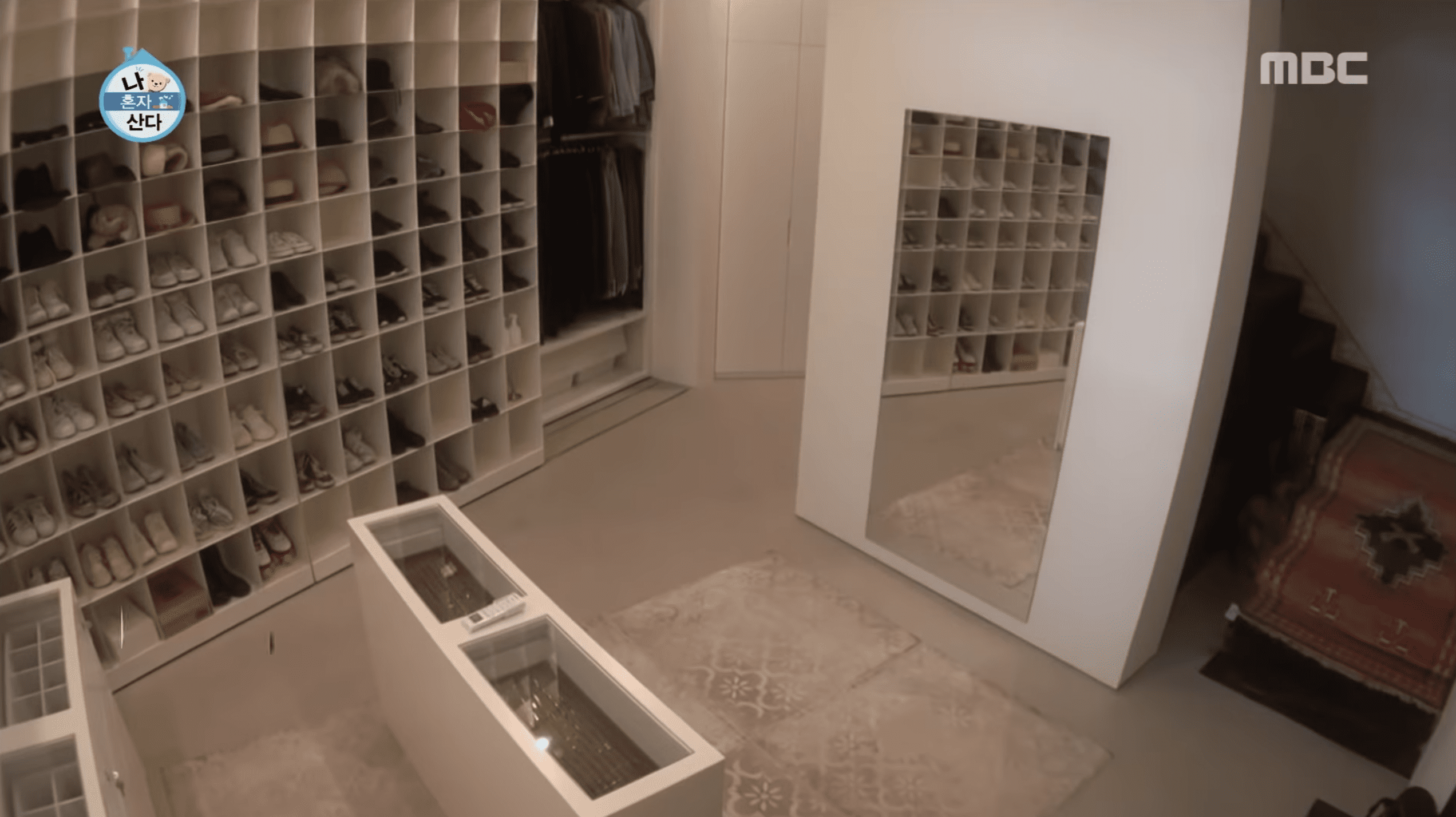 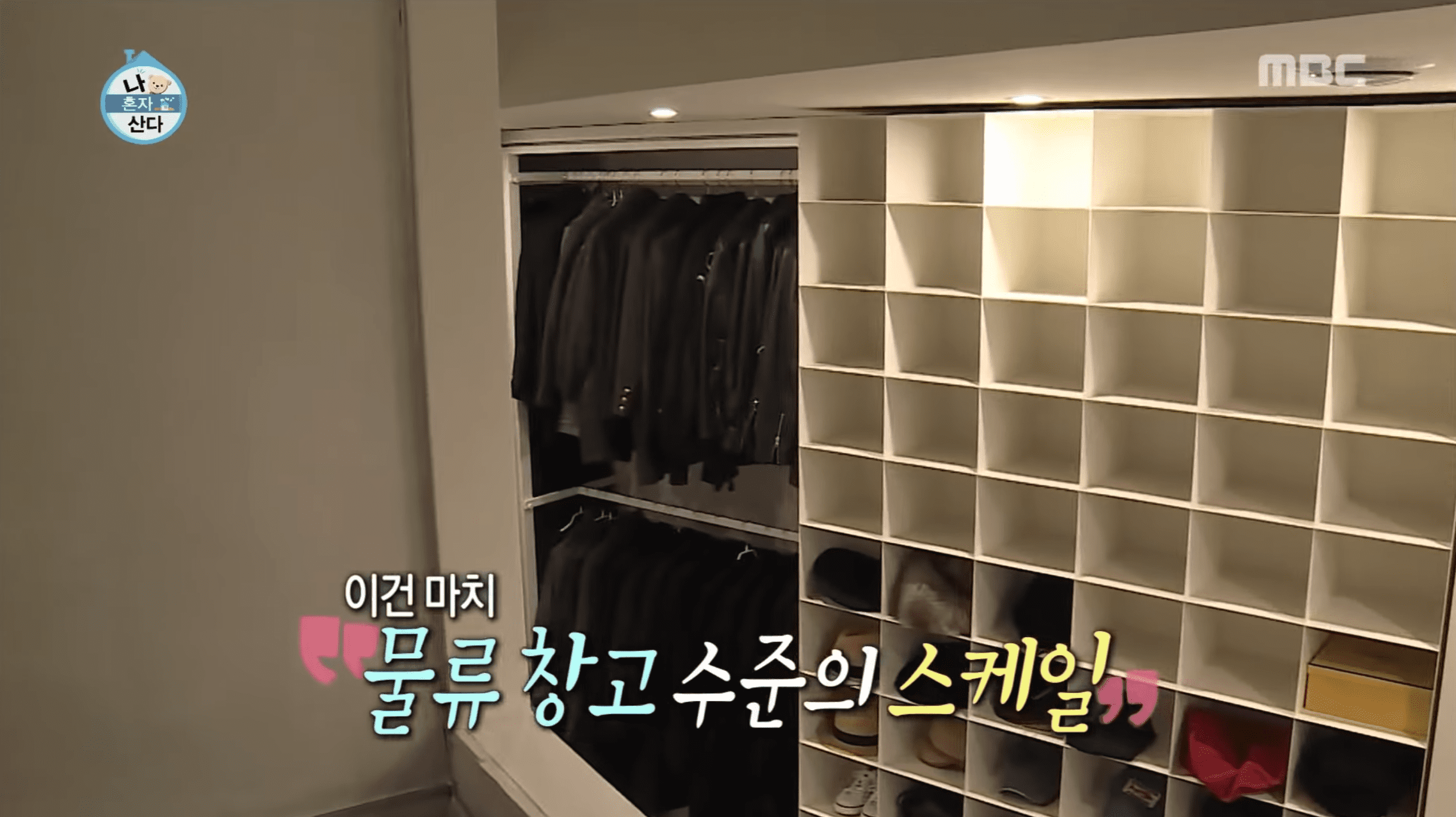 Check out Jung Ryeo Won’s house and daily life in the latest episode below: