JYJ’s Kim Junsu has now put his mandatory national service behind him, and on a V Live broadcast on November 7, held ahead of his first fan signing post-service, Kim Junsu said he still can’t believe it’s over.

He said, “It hasn’t been long since I was discharged. The [awkward] way I’m talking right now will be fixed in a week, one month tops. I’ll be showing everything up to my walking on stage at the fan signing through V Live. This is what everyone does these days? It’s so interesting.”

The singer said that, thanks to him serving as a conscripted policeman, he was able to still maintain a foot in the public eye. “If I hadn’t spent time in the promotional unit, there wouldn’t have been many photos of me, but since I was, I occasionally was on stage, and there were occasionally some photos of me [in the press]. Forget about the police officer Kim Junsu and just think of him as a brief memory.”

He then mentioned his fans teasing him about being unable to style his hair, saying, “It’s true. I’m not very good with my hands. I tried to put a little wax in my hair out of respect for the audience [when I was serving], but it was so hard. Even the people working in the barracks were better than me.”

Being out in the world still feels a little strange, said Kim Junsu. “I feel like I’m just not going back even though I have to. But I dyed my hair, got my makeup done, and put earrings on, so in a way, it does seem real. This is my first time wearing earrings in a year and nine months.” 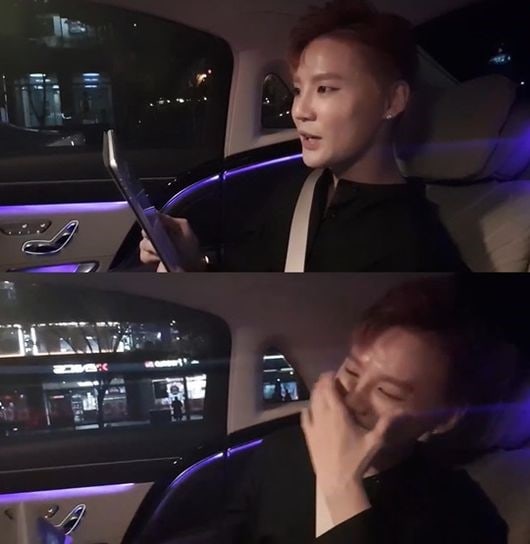 Once on stage, Kim Junsu was met with a wall of sound as his fans congratulated him on his return.

“I’m so thankful that I was able to finish my service healthy and see all of you again. This is all thanks to you. While serving, I thought of you and this moment to give me strength.”

The singer hinted at his concerts in December, saying, “I’m going to do and show you everything on stage, and I’m going to break your preconceptions of what’s possible for someone in their 30s.”

Meanwhile, Kim Junsu will also be returning through the musical “Elisabeth,” which starts in November, although it has yet to be confirmed when he will join the production.