Kangnam’s Bank Account Has 250 Times More Money Than Before He Became a Variety Star?

While Shin Dong Yup is randomly choosing the fourth singer to perform, Kangnam makes it clear that he wants to be the sixth singer, and prays not to be picked. However, luck is not on his side. 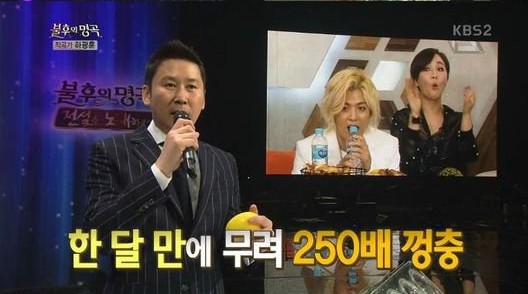 Before announcing the person, Shin Dong Yup comments, “They say the money in this person’s bank account was 250 times larger the first month after he started to become popular.” While the audience and other singers gasp in amazement, Kangnam immediately groans, knowing that Shin Dong Yup is referring to him.

Shin Dong Yup jokingly continues, “To be exact, his revenue went from 3,000 won (approximately $2.61) to 870,000 won (approximately $758.30) within a month!” The audience explodes in laughter and the MCs in the waiting room tease Kangnam, asking if his balance was originally negative. Kangnam, while laughing himself, confirms that his bank account really only had 3,000 won at the time.

Meanwhile, Kangnam will be joining the next installment of “Law of the Jungle,” alongside a mostly female cast. The exact filming location has yet to be finalized.