Euna Kim and Jeon Min Ju from The Ark gave a heartfelt message to fans as they gear up to debut as duo KHAN.

KHAN held a showcase to celebrate the release of their debut single “I’m Your Girl” on May 23 at the Move Hall in Hongdae, Seoul. Euna Kim and Jeo Min Ju first debuted as members of The Ark in 2015 but the group disbanded after their first single “The Light.” After the group disbanded, the two appeared on various audition programs and have now reunited to debut as a duo.

During the event, Jeon Min Ju was asked if she had a message for fans who have been waiting for them to release new music. She replied, “There was a long hiatus between when The Ark disbanded and now. Despite there being such a long break, our fans never forgot about us, kept supporting us, and gave us strength,” and she shed tears of gratitude as she spoke. 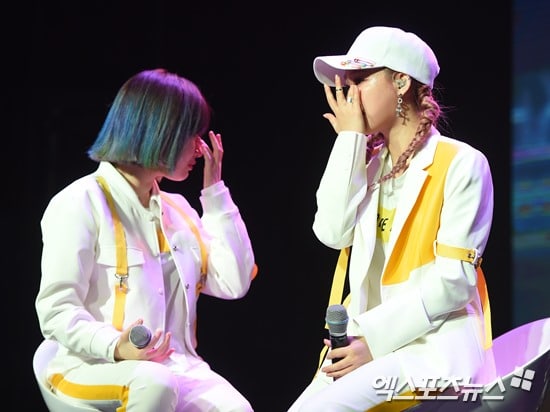 Euna Kim also added, “It was after what happened to The Ark that I truly understood how much our fans mean to us. Though we don’t have many fans, each and every one of them gives us so much strength.” She also teared up as she said, “We had a long hiatus while we were appearing on a lot of music audition programs, but our fans kept waiting for us to release new music, and we’re truly grateful for that. We’re so sorry that we weren’t able to share new music with you for so long.”

Jeon Min Ju concluded by stating, “We will make it up to our fans by doing everything now that we couldn’t do before. We want to promote and be active in a variety of ways.”