During the episode, the actors chose Choi Won Young as the best dad. The MCs called the actor on the phone and asked him which actor he’d choose as his child. Choi Won Young made everyone laugh by replying, “It’s overwhelming for me to raise my own child right now.”

He continued, “To be honest, they’re all fine. But amongst them, I like my son Chani the best.” When asked about which child he would feel the most pressure about raising, Choi Won Young answered, “Is Ye Seo there? I chose Kim Hye Yoon because she’s so good at acting that I think she might actually rebel against her parents like [in the drama].” 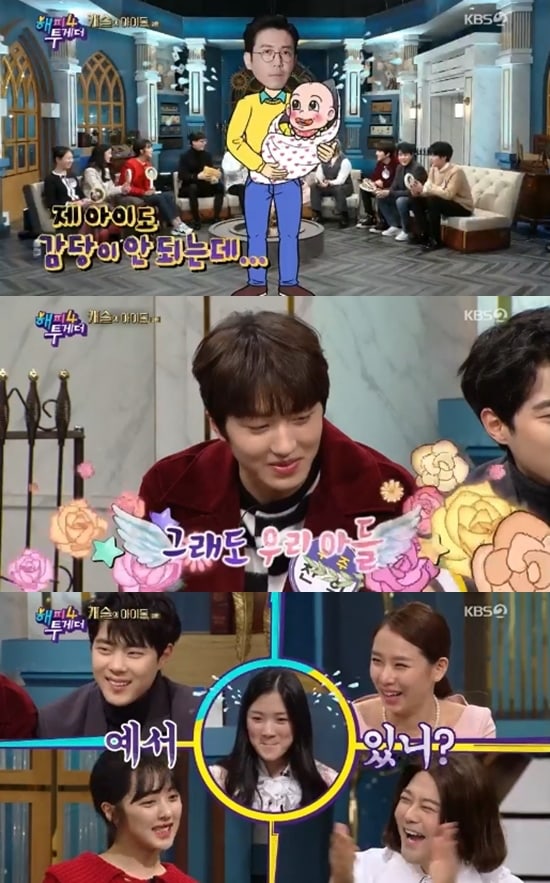 Jo Byeong Gyu confessed that he waxed his facial hair to better portray his role as a high school student. “My mustache grows a lot,” said the actor. “I got waxed 12 times. The first day I got waxing done, I passed out for about two seconds. It’s not an exaggeration. Even though I got waxing done, viewers said, ‘His 5 o’clock shadow is too noticeable for a high school student.’ That’s what it looked like even after getting waxed.”

He added, “I video chat Kim Hye Yoon often. There was a time I didn’t leave my house for about two weeks, and Kim Hye Yoon was shocked [after seeing my mustache] during our video call.”

The actor also expressed satisfaction at the filming set of “SKY Castle.” He explained, “I shared a dressing room with Kim Dong Hee. We usually filmed on a set, so it was comfortable. The couch was comfortable. The heating was so strong that Kim Dong Hee even turned it off.” He continued, “My one regret was that we didn’t have a room. Only our study room is shown. If they told us to go upstairs, we had to hide.”

Describing himself as a non-violent activist, Jo Byeong Gyu explained, “I was a soccer player. I studied abroad in New Zealand. When you play soccer, you have to constantly physically battle with others, and I didn’t like pushing and shoving others. So I focused on my strength so I could run away quickly. If they try to get physical, I just give them the ball. I think not fighting is wise.” He also talked about frequently communicating with his fans online. “There are fans who have sent me messages since when I wasn’t famous, so I reply to them because I feel grateful,” said Jo Byeong Gyu.

Chani and Kim Hye Yoon then told the story behind the scene where she sat on his lap. She began, “At the time of the scene, it was my second time meeting Chani. The staff told me to sit and wait on Chani’s lap while they set up the camera. Since we had to wait for a while, I wondered if I should only put half of my weight on him. I asked Chani if I was heavy, but he said I wasn’t.”

Chani made everyone laugh when he replied, “It actually felt heavy. It was tiring because we had to wait for almost 30 minutes.” When Kim Hye Yoon appeared embarrassed, he explained, “It was because she was sitting on only one of my legs. It felt like my leg was falling asleep. I limped when I was going home.” 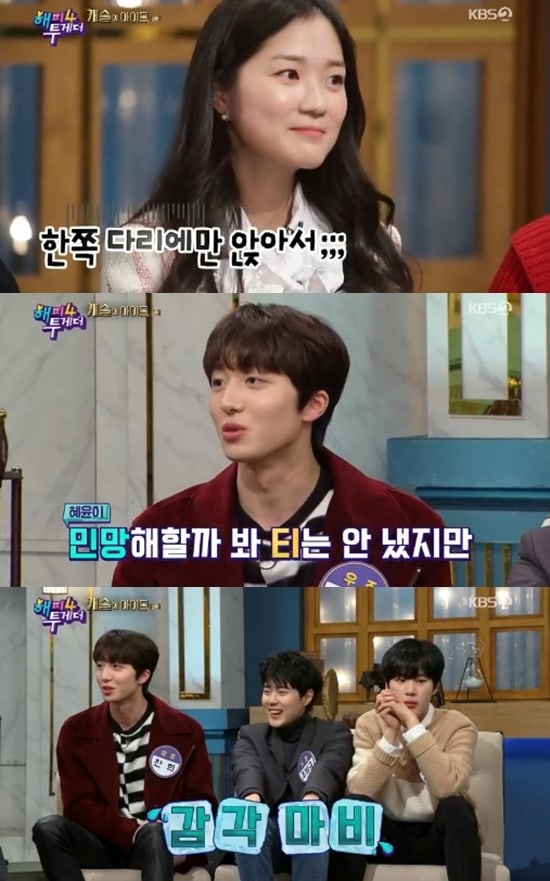 Speaking about portraying student roles in dramas despite being in her 20s, Kim Hye Yoon said, “I turned 24 [by Korean reckoning] this year. I’m graduating [from Konkuk University] in February.”

Kim Bo Ra added, “I’ve also been wearing a school uniform [on-screen] for 10 years now. Since I have a strong image of a babyface, I receive many offers for student roles. In the past, I worried a lot about when I would grow out of this image, but not anymore. There are many things I haven’t done yet and the characters are different, so there are many roles I want to try.”

Kim Hye Yoon then elaborated on her nickname “Mamel Princess” by saying, “I told the director that I hoped my character wouldn’t appear too hateful, so she was a lovable daughter in front of her mom and cold to others. I liked that people looked upon me adorably after the Mamel Princess nickname, but there were comments that said, ‘Ye Seo is losing to Hye Na’ and ‘She’s just cute.’ I wondered if I wasn’t acting well, so I didn’t wear a headband after Hye Na’s death. I also removed the bow. After Hye Na died, I said that it would be good to not wear a bow.” Jun Hyun Moo commented, “I liked that Ye Seo’s character was three-dimensional. She was cute, evil, and showed pity as well.”

She also admitted to lying in the past to get cast in a drama. “I was the daughter of Kim Sang Joong in ‘Bad Guys,’ said the actress. “It was a role where you had to play the piano really well. They asked me if I could play the piano well and I said I could. I ended up getting cast. To be honest, I can’t play at all and can’t read music. The director gave me a very difficult song which was Beethoven’s ‘Pathetique.’ I couldn’t even read music, but my friend’s mom was the director of a piano academy so I just memorized it.” 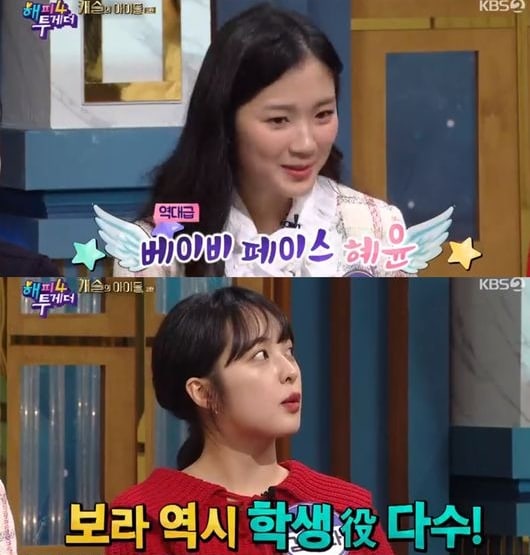 Kim Bo Ra told the story of how she became possessed by her character. “I immersed a lot of myself into Hye Na,” began the actress. She explained how usually when approached by people on the street who are known to be scam artists, she would say sorry and walk away. She continued, “But because I was immersed in my role, I said, ‘Have you thought about how you’re causing harm to others? Why are you doing this? What are you doing?’ Later, I wondered why I did that, and that person walked away startled.” Everyone burst into laughter when Jun Hyun Moo replied, “I bet that was the first time that person heard something like that.”

She also said that she apologized to Chani after kissing him in the drama. Kim Bo Ra said, “I felt so sorry after I kissed him. I knew about Woo Joo’s real feelings, but I only did that because of my rival, so I felt sorry.”

Kim Bo Ra spoke about her latest interest in film cameras. “I was raised by my grandma and grandpa when I was young, so I’m close with my maternal grandma,” said the actress. “When I go around Seoul with my grandma, I take photos of her with a cell phone. But I wanted to take photos of her in a special way, so I started taking photos with a film camera.” 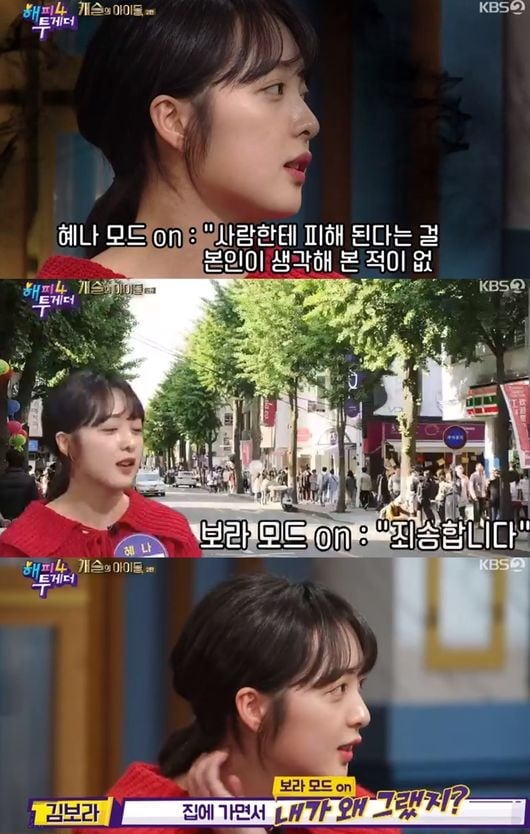 “SKY Castle” will soon be available on Viki. In the meantime, check out an episode of “Happy Together” below!