On April 2, Kim Ji Won was interviewed during a segment of KBS 2TV‘s “Entertainment Weekly.” The MC immediately compliments her on her petite face, to which Kim Ji Won smiles and says, “I think I just grew up this way.”

First Lieutenant Yoon Myung Joo, Kim Ji Won’s character in “Descendants of the Sun,” as well as the actress herself, is currently one of the most popular women on television, especially amongst females. Kim Ji Won explains, “People seem to say Yoon Myung Joo is a ‘girl crush.’ I think they like that she is independent, and protects more than she receives protection.”

Kim Ji Won recalls one of the scenes she remembers the most as when her character was “talking with Seo Dae Young in the hospital. We put in a lot of effort while filming that scene, but they edited it beautifully as well. As for the coolest scene, she explains Song Joong Ki‘s “Then, save him” scene was “really impressive. End of story.” 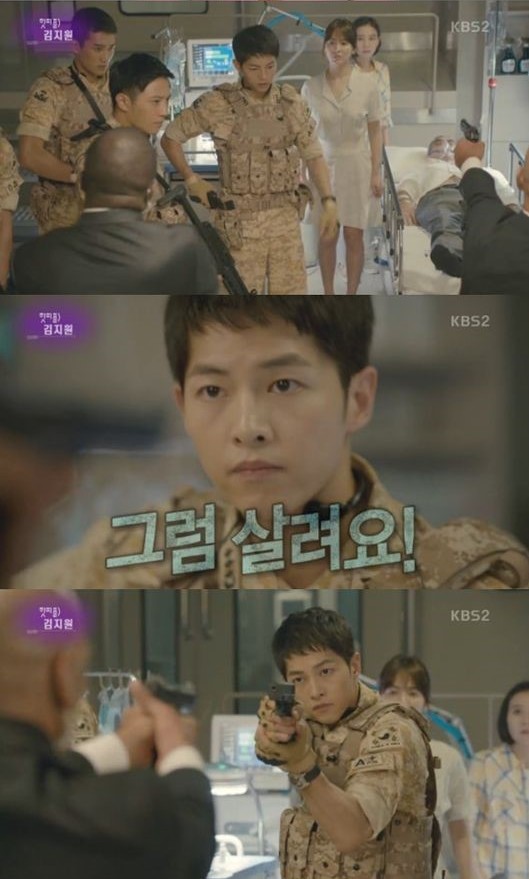 During the interview, she also expresses her thoughts on the “GuWon couple,” and even gives Jin Goo (who plays Seo Dae Young) a call. As the youngest member of the main cast, she constantly thanks her seniors for taking care of her so well during filming.

What are your most memorable scenes? Check out Kim Ji Won as Yoon Myung Joo and see for yourself why this character is so popular!