Kim Ji Won, who is currently experiencing explosive popularity due to her role in the hit KBS drama “Descendants of the Sun,” shared her appreciation for her co-star Jin Goo.

Describing him as “the best partner,” she said, “Jin Goo sunbaenim really suffered a lot at the beginning of the filming because of me. I don’t think I could have done it without him. He helped me so much. I feel so sorry and also so thankful to him. Whether it was to support my struggling acting, listen to my concerns, give me food or snacks or always supporting me, I’m sure that Jin Goo sunbaenim was really busy because of me. He should have reprimanded me at least once but not a single time did he say anything negative and instead he was also warm and friendly as he led. I was so thankful. I think he is the best partner that I’ve had in my life. Haha!”

When asked who she would have picked between the two male stars of Jin Goo and Song Joong Ki, without hesitation, she replied “Jin Goo sunbaenim. Perhaps because even from before the filming for the drama to until now, I have lived for Seo Dae Young and so even now, I am all for Seo Dae Young,” calling Jin Goo by his name in the drama.

“When we started filming, I was only concerned about my parts and trying to act well and so I was too busy to be concerned about the expressions of my co-stars or think about how the two of us were coming up on the screen. It wasn’t until I saw it on the broadcast on television that I realized that Jin Goo sunbaenim is so attractive. When scenes of him struggling with Myeong Joo’s dad come up, even I get angry and I even cried. Yoo Shi Jin (the role played by Song Joong Ki) is flawlessly handsome as well, but for me, I am always Seo Dae Young. Haha!” 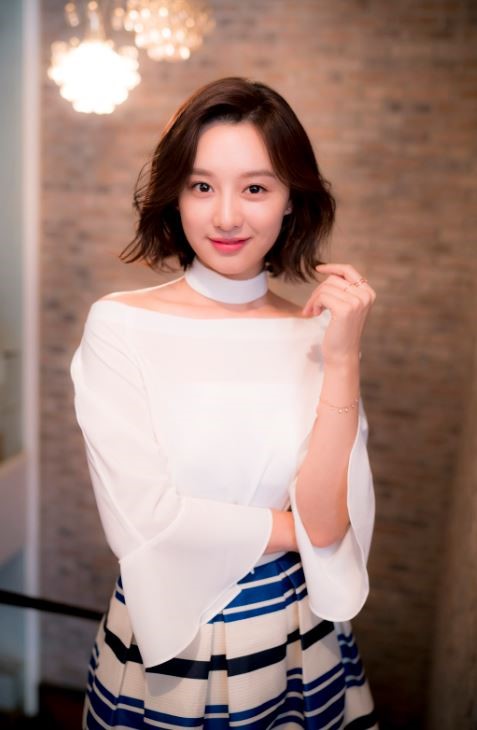 Moreover, she praised not just the actor Jin Goo but the person Jin Goo as well.

“I’ve noticed this from the filming but I have so much to learn from Jin Goo sunbaenim and Song Hye Kyo sunbaenim and Song Joong Ki sunbaenim in terms of not just acting but from their attitudes as well. They were not once late and even come early to rehearsals and check through with the staff and have conversations with them. It made me embarrassed to think about how hard working they were compared to myself. Even if they’re popular or have been in the industry for a long time, they don’t pay much attention to that and instead lead the atmosphere well. I was so touched by that. In particular, Jin Goo sunbaenim is so funny but yet determined and so many people like him. He’s a person that combines all the qualities of friendliness, charisma and gentleness.”

When asked about her growing popularity, she laughed and sure enough turned the attention back to Jin Goo. Perhaps because she was shy to talk about herself, but she instead mentioned the immense popularity that Jin Goo was experiencing. She said, “There’s a lot of people around me who say that it is such a shame that Jin Goo is married. His popularity is to the point that people joke like that. There’s so many people who have asked me for his autograph.”

She added, “Actually, for me, there hasn’t been much difference. When I think about the different interest and expectations that are held of me now, I think about luck. Its all due to such talented sunbaenims who make me look so good. It’s embarrassing and burdensome. I still am lacking in so many ways but I’m going to work hard to repay all of the love that I have received. I want to stay humble and steadfast and work hard as an actor to show a better side of me. Please look forward to it!”

You can watch “Descendants of the Sun” on Viki below!