Kim Jong Kook Opens Up About His Insecurities on “Running Man”

On the most recent episode of “Running Man,” Kim Jong Kook admits something that’s been troubling him.

In the episode that aired on April 17, the members share some of their innermost concerns. After meeting with previous guests on the show that had been wronged in some way or another, the members are given the opportunity to write down their thoughts on a sheet of paper.

The first person to go into the room with Yoo Jae Suk is none other than Kim Jong Kook. Despite the awkward atmosphere, Kim Jong Kook opens up about his performance on “Running Man.” He says, “Because it’s my ‘concept,’ sometimes I’ll talk or act really aggressively. Since it’s variety and on a broadcast, I figured it’d just be understood and acted as I did.” 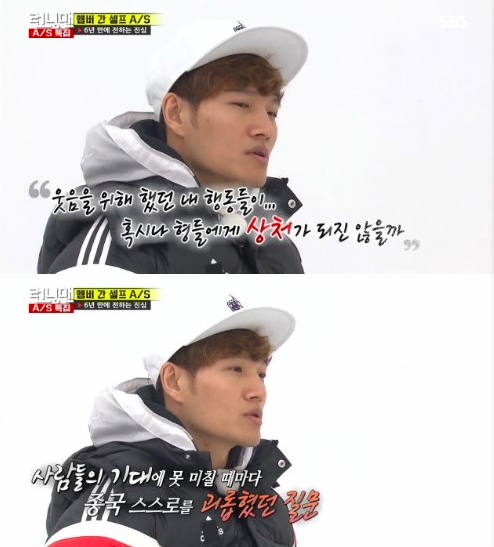 He continues, “Every person has their heyday, but even I’ve hit a slump. I feel like I’ve fallen short of people’s expectations, so I’ve started wondering if it’s right that I’m here [on ‘Running Man’].”

You can watch Kim Jong Kook’s full confession in the episode below.