Kim Jong Min shared on the final episode of season one of “Taste of Dating” that he and Hwang Mi Na have parted ways.

On the February 21 episode of the show, Kim Jong Min spoke candidly in an interview with the production team. When asked why he decided to appear on the program, Kim Jong Min said, “I did it because I thought maybe there was a possibility. I really was thinking about marriage. I didn’t approach it as a television show. Since you never know.”

He went on to say, “I really did feel like we were dating. It was truly and sincerely great.”

Kim Jong Min then revealed, “Since we’re both busy, it’s been a while since we’ve contacted each other. We said we should meet, but we’ve been too busy. I’ve been busy preparing for the album and so it wasn’t easy to get in touch.”

“When we had an episode filming planned, rather than it being like filming to me, I felt like it was the time when I was really going to meet Mi Na,” he said. “We didn’t have much time to meet outside of that. But I think she may have thought ‘We only meet when we’re working.’” 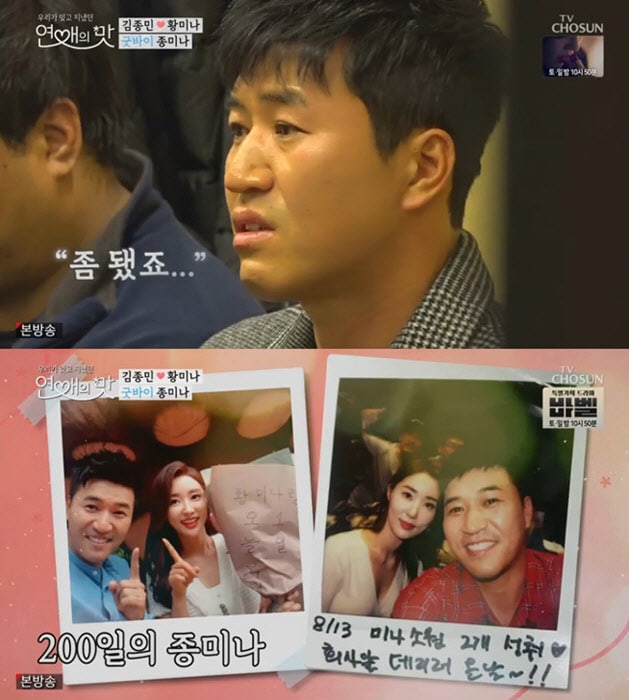 In a clip from the couple’s previous trip together, Hwang Mi Na was shown confessing to Kim Jong Min that she sometimes wanted to contact him in between their meetings but worried that he would be busy or tired. She said she realized that while she was thinking about him and wanting to talk to him, she hadn’t told Kim Jong Min so he wasn’t aware of that.

After Kim Jong Min didn’t reply, she said, “I feel like rather than you being enthusiastic and approaching me, you are kind of still or being cautious.” Kim Jong Min also seemed unable to reply to this and they sat in silence. A caption explained, “The misunderstandings began here.”

In his interview, Kim Jong Min said, “I think it must have been really confusing for her.” He explained that he’s not the type to talk things out or express his feelings. “When I think about it now, I think it’s better to be clear in the way you express things and break up,” he said.

Kim Jong Min also talked about the news articles that had said the pair were preparing for a wedding. “I think there was some possibility for misunderstanding,” he said. “While I was talking about myself, the topic of marriage came up. Producers [of other shows] were interested and so of course they asked about it. Since I’m a TV personality, I couldn’t avoid answering, which led to articles.”

“I’m used to that kind of talk now, but I think it must have been hard for her to deal with,” he said. “It must have been a lot of pressure. Other people around her would have had a lot to say about it too. This isn’t just a topic between the two of us, but one between our families, so it’s hard to deal with.”

When asked if he hadn’t talked to Hwang Mi Na about it, he replied, “There were so many articles that it was hard to explain one by one to her. And part of me hoped that she would understand this, since I’ve been doing this job all my life.” He said, “I hope our dating won’t be a source of pain or trauma for her.”

“Taste of Dating” is a show where single celebrities go on dates for 100 days with partners that fit their ideal types. Kim Jong Min and Hwang Mi Na were first matched as a couple in September 2018, and decided to continue dating in real life after finishing the first 100 days of their “dating contract.” The second season is planned to begin in May.