Photocards are one of the biggest wonders of the K-Pop world. Fans are willing to trade and sell rare finds for hundreds of dollars knowing they likely cost just pennies to make. But while most fans have considered the price of producing photocards, few know about the process of making them. To find out, let’s go behind the scenes with Red Velvet‘s Wendy as she personally puts together her solo debut album, Like Water.

In a special hands-on experience most idols never try, Wendy took fans behind the scenes of her album production in a new YouTube video. First stop: the production facility’s Prepress Room, also known as the Offset Room.

Traditionally, the most important part of any album package is the CD itself. Nowadays, however, K-Pop fans care far more about the fun additions inside. The Prepress Room is where all these goodies come to life.

In the case of Wendy’s album, Like Water, this is where her posters, postcards, bookmarks, and photobooks were printed—and, of course, her gorgeous photocards.

One of the workers at the printing press gave Wendy a tour of the machinery, which uses just four ink colors to create the vivid album extras fans fall in love with. According to the worker, album additions can be printed in any size, and the machinery prints up to a staggering 15,000 pages every hour.

Wendy revealed she brought two special selfies with her to create the limited edition photocards in her album, but it’s likely that the members’ selfies are usually sent over to the printing press digitally by the agency.

Once everything is set up, printing photocards is easy as the push of a button. 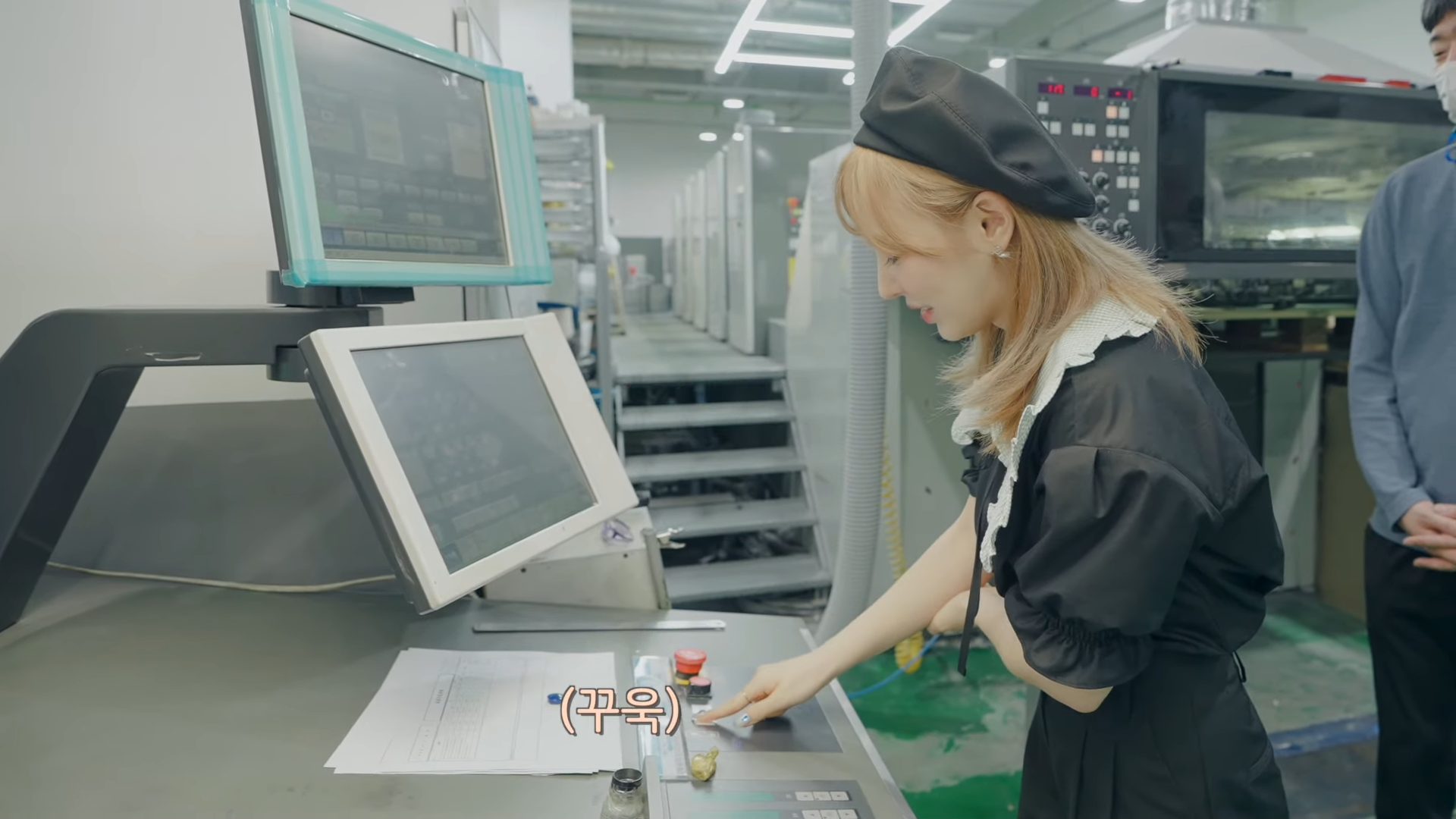 Perhaps surprisingly to many fans, photocards leave the printing press in the form of a flat sheet with lines cut around each card. Workers are then responsible for pressing the individual cards out by hand, which explains the minuscule tears you see in the corners of most photocards.

Once everything is printed, it’s time to assemble all the album packaging. Ever hardworking, Wendy put together the packaging for her special edition albums by hand to demonstrate how it works. Her tasks including pressing out all the photocards…

Putting the CDs in their slots…

Filling the envelopes with postcards…

And making sure every fan got a photocard.

No matter how you feel about overpriced photocards, there’s no doubt that receiving an album hand-packed by your idol is worth its weight in gold. With that in mind, Like Water also has another special edition which is literally worth a lot more than a standard album. The case is filled with preserved flowers that will last several years, and only 300 copies of this special album were created.

An extra special copy was made by Wendy herself, who demonstrated the precision needed to carefully place each tiny flower without damaging it.

To finish off, she hand-wrote unique, individual messages on all 300 cards to go inside the albums. These photocards would likely be worth three to four figures on the K-Pop market, but who could bear to part with something so special?

Watch the full album making video for yourself here: