Ku Hye Sun continues to make her mark as a multi-talented individual!

She is currently holding an art exhibition in Paris, France titled “Ku Hye Sun Invitational Exhibition,” which began on November 13 and will go till November 16. Under the title of “Null,” Ku Hye Sun showcased 25 never-before-seen art pieces, expressing the deep emotions within human beings through abstract lines and colors. 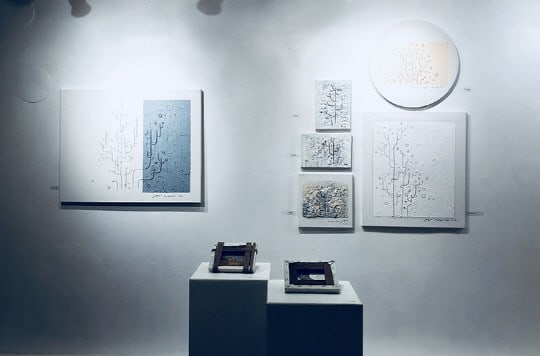 Not only has Ku Hye Sun been pursuing an acting career, but she has also been recognized for her talents in a variety of fields as a film director, writer, and artist. Ku Hye Sun made her debut as a director in 2008, and has since made her mark in the independent film industry with works that reflect her unique color. She has also released a new age album as a composer and released a screenplay as a book, showcasing her writing talents. In 2009, she held her first art exhibition and has since held multiple exhibitions not only in Korea, but in Hong Kong and Shanghai as well.

Ku Hye Sun’s solo art exhibition is Paris has been another opportunity for her to show her growth as an artist. The exhibition will be open until November 16.