MTV‘s Video Music Awards on August 30 was a night to remember for K-Pop fans. Adding to their already long list of accomplishments as a group, BLACKPINK made history yet again with their track “How You Like That”.

Rather than taking home an award for the K-Pop category, they won the achievement of “Song Of Summer” and became the first female Korean group to win a VMA ever. Although BLACKPINK didn’t receive an opportunity to perform on the awards show, they ended up making a small appearance thanks to Lady Gaga.

Since BLACKPINK featured on the track “Sour Candy” from her latest album Chromatica, Lady Gaga found a way to include the group in her medley performance of the album on the awards show.

At the very beginning of the stage, it opened with the camera following Lady Gaga as she lounged on a bed and glanced at the TV, as the viewers would be. That’s when eagle-eyed fans spotted something behind the songstress. 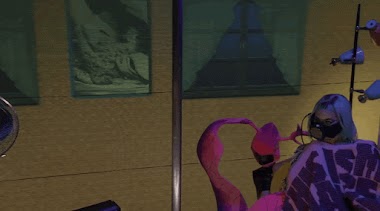 Of all the posters that were on the wall behind Lady Gaga, there was one with a piece of red tape above it. The black and white photo had been one of BLACKPINK, which turned out to be the one below.

The fact that Lady Gaga added such a small detail to show her love and support for BLACKPINK had touched many fans—especially with the group not being able to take the stage themselves for a “Sour Candy” stage.