The most recent broadcast of “Law of the Jungle” saw its highest ever ratings thanks to AOA’s Seolhyun.

The April 8 episode recorded a whopping 21.2 percent rating, taking the show to the No. 1 spot for that time slot. Compared to the average 15 percent viewer ratings, that’s a 6.2 percent increase! 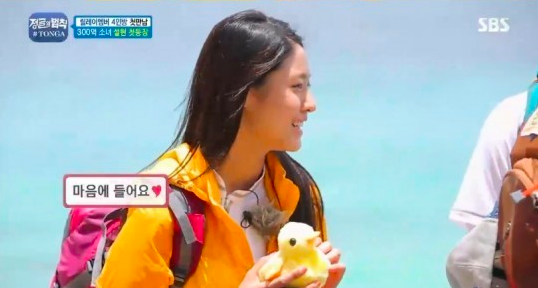 In the episode, Seolhyun captivates the viewers’ attention with her focus on setting up camp under the scorching Tonga sun, where temperatures rise to 40 degrees Celsius (about 104 degrees Fahrenheit) by 10 a.m. local time. Additionally, showing off an outstanding sense of distance and balance, Seolhyun is able to hunt for snails after learning how to snorkel for the first time.

Seo Kang Joon comments, “Is there anyone in Korean who doesn’t like Seolhyun?,” much to the viewers’ amusement.