“Touch Your Heart” is a romantic comedy that follows the romance that blossoms between perfectionist lawyer Kwon Jung Rok (played by Lee Dong Wook) and Korea’s top actress Oh Yoon Seo (played by Yoo In Na) after Oh Yoon Seo ends up working for him under false pretenses.

In the drama, Kwon Jung Rok and Kim Se Won (played by Lee Sang Woo) are old-time friends who attended everything from law school to even the Judicial Research and Training Institute together. Unlike Kwon Jung Rok, who is quite feisty, Kim So Won is relaxed and often wears a gentle smile on his face.

In the released stills, Kim Se Won leaves work to arrive at Kwon Jung Rok’s home. From his wet hair to his comfortable clothes, Kwon Jung Rok, a known perfectionist, isn’t afraid to show his unkempt appearance to Kim Se Won. These photos reveal that the two are best friends who feel comfortable around each other.

Although they are best friends, the two have contrasting personalities as Kwon Jung Rok maintains his serious posture but Kim Se Won’s face is full of mischief. Kim Se Won innocently asks Kwon Jung Rok about his new work life with Oh Yoon Seo, and the perfectionist lawyer fires back angrily. 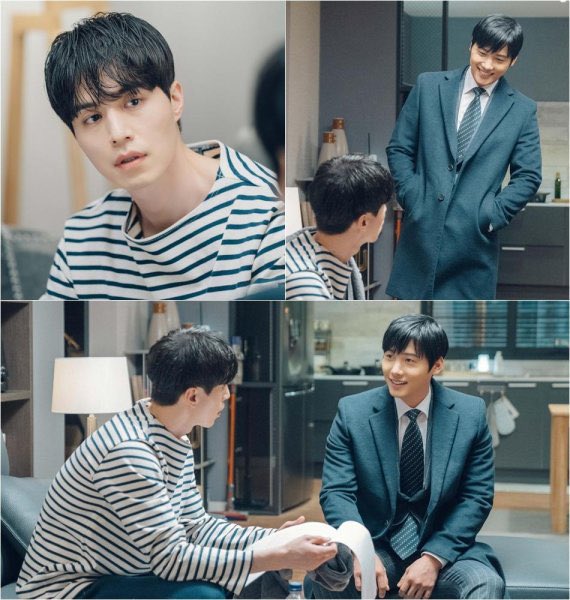 A source from “Touch Your Heart” commented, “Kwon Jung Rok and Kim Se Won will captivate viewers with their bromance that is like no other in the world. There will be a fun in seeing new sides to the perfectionist lawyer Kwon Jung Rok only when he is with Kim Se Won. Please look forward to ‘Touch Your Heart,’ which will premiere on the last day of the Lunar New Year holidays [February 6].”