Recently, new stills from the drama “The Liar and His Lover” were released, giving viewers a preview of a fight scene.  The stills show Lee Hyun Woo grabbing Song Kang by his collar and wrestling him on the floor. In the drama, Song Kang’s character has a secret crush on Joy, who is in love with Lee Hyun Woo’s character.  Viewers can expect a lot of emotion and drama as this love triangle rivalry unfolds. 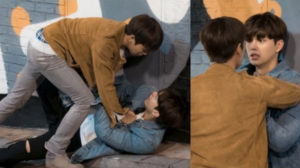 In the most recent episode of tvN’s “The Liar and His Lover,” Lee Hyun Woo’s character Kang Han Kyul is caught in a lie as his true identity as the producer of the popular idol group Crude Play is revealed. Furthermore, he finds out that the rookie group he is supposed to help produce is Yoon So Rim’s (Joy‘s) band.

“The Liar and His Lover” is a remake of a Japanese manga series about a high school girl who falls in love with a prodigious music producer.  Catch the next episode on Monday, April 3 at 11 p.m. KST.