The film marks Lee Jin Wook’s return to movie screens after three years away. “Winter Guest Scarier Than A Tiger” will tell the story of a winter day when a tiger breaks out of a zoo, Kyung Woo (played by Lee Jin Wook) suddenly gets dumped by his girlfriend, and his ex-girlfriend (played by Go Hyun Jung) shows up in front of him.

Go Hyun Jung and Lee Jin Wook recently worked together on SBS’s “Return” before the actress stepped down from the drama in the middle of production.

Lee Jin Wook said, “Go Hyun Jung is someone that I personally like as an actress. There’s a lot to learn from her as an actress and as a person. There were many instances during filming when I was moved. It made me think that I should become a senior like Go Hyun Jung.”

He continued, “She has a brilliant sense of acting. I think she has a very polished style of acting. She expresses the character like a picture or music. As an actor, I was able to find the answers that I wasn’t able to while watching her acting. It was a great experience.” 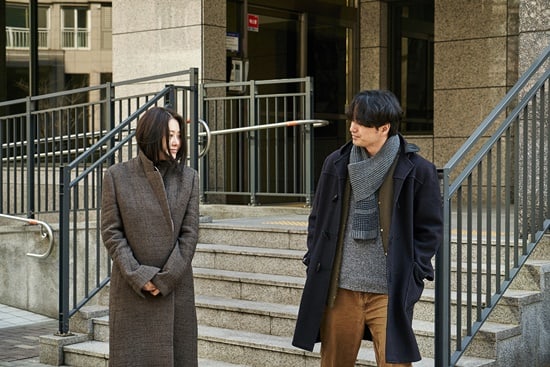 Lee Jin Wook expressed regret at not being able to promote the film with his co-star at the event. He commented, “It would’ve been nice if she was here next to me, so it’s unfortunate,” and said that he misses her.

Lee Jin Wook also commented on Go Hyun Jung’s departure from “Return.” He stated, “I don’t have anything to say in particular. It was unfortunate that we couldn’t be together until the end. Big or small instances happen on every set, there are just different ways of solving them. I think many things will settle down after time passes. Time solves a lot of things.”

He also shared Go Hyun Jung’s thoughts on missing out on the press conference. Lee Jin Wook revealed, “She said that she was sorry and I told her, ‘There’s no need for you to think that way.’ She said, ‘Do a good job next to the director.’”