Lee Kwang Soo Tries To Save Face In Front Of TWICE

The May 6 episode of SBS’s “Running Man” included the second part of the one-year anniversary special for Jun So Min and Yang Se Chan.

During the episode, one of the missions was to not do anything for 30 minutes and remain silent. Of course, the Running Man members did everything they could to get each other to laugh, such as showing each other funny photos. Lee Kwang Soo was the first person to break the silence, and he had to receive the punishment.

However, the hidden punishment was being flogged, and Lee Kwang Soo was dragged outside. At that moment, he coincidentally encountered TWICE, who happened to be leaving after filming. Making everyone on set laugh, Lee Kwang Soo yelled out to TWICE, “Hey wait, go! Go! Don’t watch, kids!” Resigned to his fate, he then shouted, “You guys worked hard today! Get home safely!” 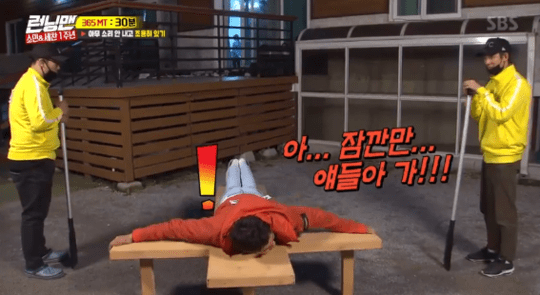