tvN’s “Youn’s Kitchen” is the third successful variety show Lee Seo Jin and producing director (PD) Na Young Suk have worked on together. The two previously collaborated on “Grandpas Over Flowers” and “Three Meals A Day.” The first season, filmed in Bali, Indonesia, finished airing last May and the upcoming second season was shot in Tenerife, the largest of Spain’s Canary Islands.

Lee Seo Jin began, “It was completely different from season one. [The place we went to] wasn’t a touristy vacation spot but an actual local village, so the atmosphere itself was different.” He went on to say that this season was much more difficult than the last. “I went swimming in Bali because I had some free time, but this time, I didn’t have time to rest at all. It wasn’t just about setting spoons and chopsticks, I constantly had to change the dishes and serve customers,” Lee Seo Jin explained.

Fortunately, the restaurant appeared to have been hugely successful. “After ‘Youn’s Kitchen’ opened and word got around that the food was good, an incredible number of people rushed in,” Lee Seo Jin revealed.

One of the things Lee Seo Jin paid special attention to was the quality of the food and their manners while serving dishes, as he was opening a Korean restaurant in Spain. He said, “I thought Koreans may understand our small mistakes, but it would be different when it comes to foreigners. I thought our food and serving manners should be perfect. It was a lot harder because we had to be aware of these factors even when there were so many customers.”

Lee Seo Jin also revealed that when he first began filming “Youn’s Kitchen,” he didn’t think the program would do well. “But I think ‘Youn’s Kitchen 2’ will be more fun than season one,” he added with a smile. “I get a different feeling.” 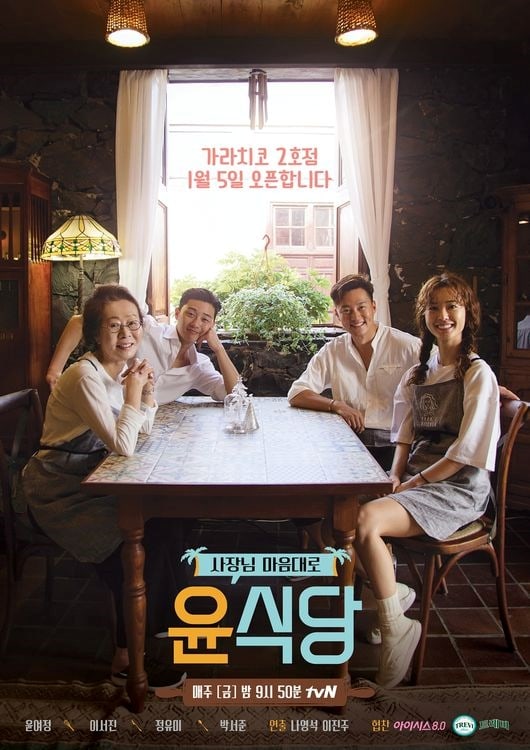 On the other hand, “Youn’s Kitchen 2” was a completely new challenge for Park Seo Joon. Following in the footsteps of Yoon Yeo Jung, Lee Seo Jin, and Jung Yoo Mi, who featured in the first season, Park Seo Joon joined the second season as the youngest cast member.

“I did have experience from working part-time as a waiter before I debuted, but it was entirely different from that,” Park Seo Joon said. “It will be my first [long-term appearance] on a variety show. I thought I’d be distracted by the cameras because there were 40, 50 of them on the set, but I slowly began to focus on the given situation. This wasn’t like acting or being in an impromptu play; I simply became one of the people running the business. I can’t remember what my facial expressions were like or what I said.”

He went on, “There was an afterparty with all the staff and the cast yesterday. When I said, ‘I’m so worried, I can’t remember anything,’ PD Na Young Suk replied, ‘It’s always like that. You’ll know when you see [the show].’ I should watch it by myself at home or something. Right now, I’m even thinking about not watching it at all.”

Because the first season of “Youn’s Kitchen” was so successful, expectations are high for the second season as well. Park Seo Joon admitted that the high expectations are one of the things that worry him. He explained, “I had a lot of concerns as I was a new member. I think I tried harder so that I’d be recognized. There’s a lot I learned. It was a really great experience I had with good people. I wonder if I’ll ever get to have the experience of working in a completely foreign restaurant, seeing and learning new things, again.”

Park Seo Joon agreed with Lee Seo Jin that running the restaurant was far from easy. According to him, the first three to four days were the hardest, as his body wasn’t used to working that way. The actor revealed how when he watches “Kang’s Kitchen,” a currently airing show with a similar premise, featuring Kang Ho Dong, he wonders how the “Youn’s Kitchen” team managed to complete tasks that five men trip over themselves to do on “Kang’s Kitchen.”

“You’ll know what I mean when you see the show,” Park Seo Joon said. “I’m itching to say more, but I have to hold back. Until now, it was a good experience, but as [the date of the premiere] comes closer, I’m becoming more nervous. I don’t think I’ll be able to watch it.”