Lee Seung Gi showed how much of a caring grandson he is on SBS’s “Master in the House.”

On the May 6 episode, the cast continued learning from their newest master, actor and director Cha In Pyo.

Cha In Pyo told them about his book “Right Now” and explained, “If you don’t do what you’re thinking about right now, then you won’t be able to do it.” He then asked the members what it was that they want to do the most right now.

After some sincere thinking, Lee Seung Gi admitted, “To be honest, my grandmother lives in Sokcho and I haven’t visited her in four years. My schedule was always busy so I kept pushing it back.”

Cha In Pyo replied, “What are you worrying about? Let’s go first thing tomorrow.” Lee Seung Gi became quiet as he felt more guilty about not seeing his grandmother. He continued, “My grandmother can’t ride the bus, so she couldn’t come to her grandkids’ weddings. Over the phone, I told her that I’d visit her after I got discharged from the military, but I couldn’t even do that once.”

Cha In Pyo responded, “Don’t worry about it. Your grandmother will like it even more if we go with you,” and the cast made plans to head out next morning. Feeling sorry, Lee Seung Gi asked, “Are we allowed to decide right away like this?” to which Yang Se Hyung replied, “We’re okay but I think the crew is flustered.”

Next morning, Cha In Pyo was an early bird. He got up early in the morning and even went to the cafe to grab some coffee. When the members woke up and saw that he was all ready to go, they asked him if he even sleeps. He confessed, “I set the alarm to ring one hour early.”

In the car on the way to Sokcho, Cha In Pyo introduced them to his wife and actress Shin Ae Ra. His restless personality, however, caused him to end the phone call before they could say hello and continued when they stopped at a beach in Sokcho. “We don’t have a lot of time,” he said and tied his shoelaces while walking.

When Lee Seung Gi arrived, his grandmother came out to greet him. He was nervous before reuniting with her, but ran and hugged her when he saw her. She warmly greeted the other members as if they were also her grandsons and invited them in.

Lee Seung Gi said, “It’s awkward seeing my grandmother on broadcast,” and she revealed she was a big fan of “Master in the House.” She said, “I laugh every day while watching this” and said to Yang Se Hyung, “He’s so funny. I really like him.”

Although they couldn’t stay for long, they shared a warm meal with Lee Seung Gi’s grandmother.

When she revealed that she used to be a singer, Cha In Pyo asked her to sing for them. At first, she denied the request out of shyness, but sang while the members cheered for her. Surprised, Lee Seung Gi said, “It’s also my first time hearing this.” 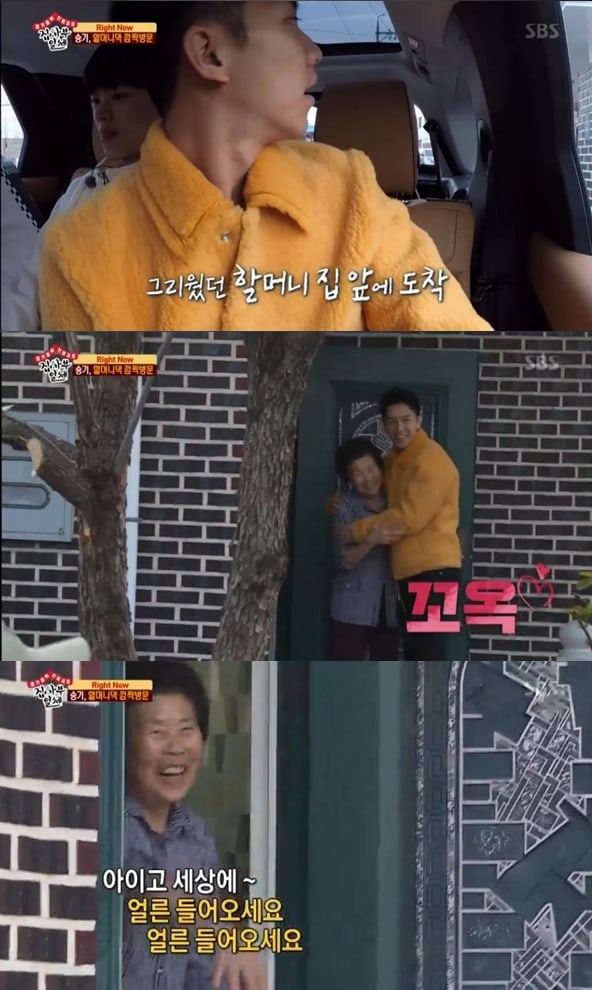 Cha In Pyo asked Lee Seung Gi if there was anything he wanted to say to his grandmother after seeing her for the first time in a while. He said, “I really missed her. With work as an excuse, I didn’t visit her and called her asking, ‘You’re doing well, right?’ Those words include things like ‘I miss you’ and ‘I love you’ so I don’t specifically say those things to her.”

He continued, “I think there are times that I think that I did my filial duty with those phone calls because I’m so busy, but with this opportunity…” His grandmother commented, “I’m happy talking to him on the phone and seeing him on TV.”

The actor said, “I don’t think I’ve actually said these words out loud, but since it’s ‘right now,’ Grandma, I love you.” She smiled while responding, “I love you too,” and they embraced and held hands.

The other members looked visibly touched by the moment and Cha In Pyo looked at them with a big smile on his face. Lee Seung Gi and his grandmother also got some alone time. They sat on the couch and talked about her health. She assured him that she was okay and he told her to tell him if anything hurts so he could help.

The two walked out holding hands and the members bid her farewell. Even after they said goodbye to her, they had a hard time getting in the car to leave. As they left, she waved them goodbye.

Watch the latest episode of “Master in the House” below: