On the December 16 episode of KBS 2TV’s idol rebooting program “The Unit,” the remaining 90 contestants worked hard to prepare for their third mission.

The third mission asked contestants to “self-produce” their entire performance, from the choice of their song, choreography, outfits, to stage concepts. Contestants were divided into vocalists, rap/vocalists, and performers, and competed against one another.

Lim Jun Hyeok revealed his thoughts about appearing on “The Unit” while taking a break with his teammates in the Yellow Team during practice. The idol is a former member of DAY6, and also promoted with a different band, Be-Blossom, for a short while.

He confessed, “The reason I considered not doing music at all was because I started wondering why people were so scary. I was so scared of people that I couldn’t do anything.”

“I can confidently say that I worried more than anyone here about appearing [on ‘The Unit’]. I can’t smile comfortably on stage. I feel like people are going to criticize me no matter what I do,” the singer explained. 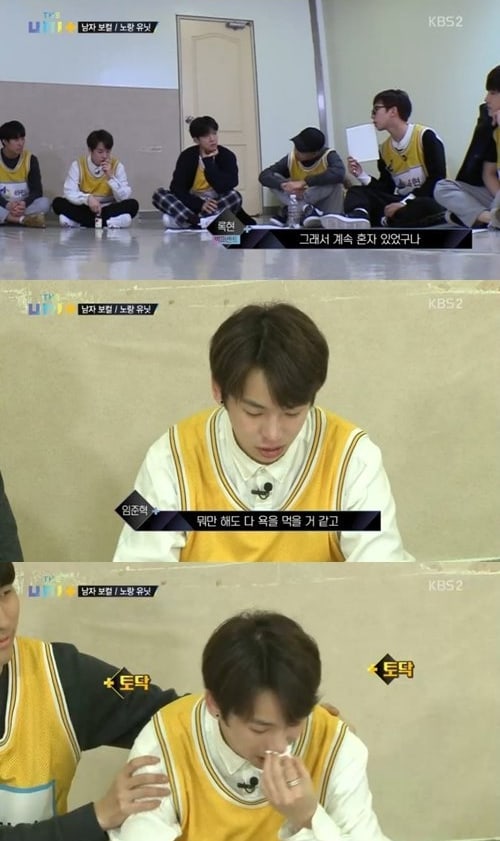 Lim Jun Hyeok tearfully stated, “I appeared on the show because I knew that I would continue making music even just as a hobby, so I resolved that I would face it head-on before I got any older. I have never opened up about this before to anyone. Even my parents don’t know.”

During this broadcast, Lim Jun Hyeok and his team prepared an impressive stage of Taeyeon’s “U R.” Check out their performance here, and watch the full episode below!