On April 28’s episode of “Happy Together,” ex-pro gamer Lim Yo Hwan reveals that he and his wife, actress Kim Ga Yeon, have planned their wedding ceremony around the schedule of Yoo Jae Suk.

Kim Ga Yeon and Lim Yo Hwan are officially already married, as they registered their marriage in February of 2011, but are finally holding a wedding ceremony to celebrate this May, and Kim Ga Yeon’s close friend Yoo Jae Suk will be officiating.

On “Happy Together,” Lim Yo Hwan is asked why he chose to hold the ceremony on May 8. He replies, “Because Yoo Jae Suk is officiating and he said he was free that day.”

Yoo Jae Suk adds, “I was so surprised when I heard this. I promised Kim Ga Yeon a long time ago that I would officiate her wedding. But then I got a call from Kim Ga Yeon saying she was holding a ceremony, and asked me to officiate.”

“She said, ‘We’re going to pick the date based on your schedule,’” he explains, making everyone laugh. 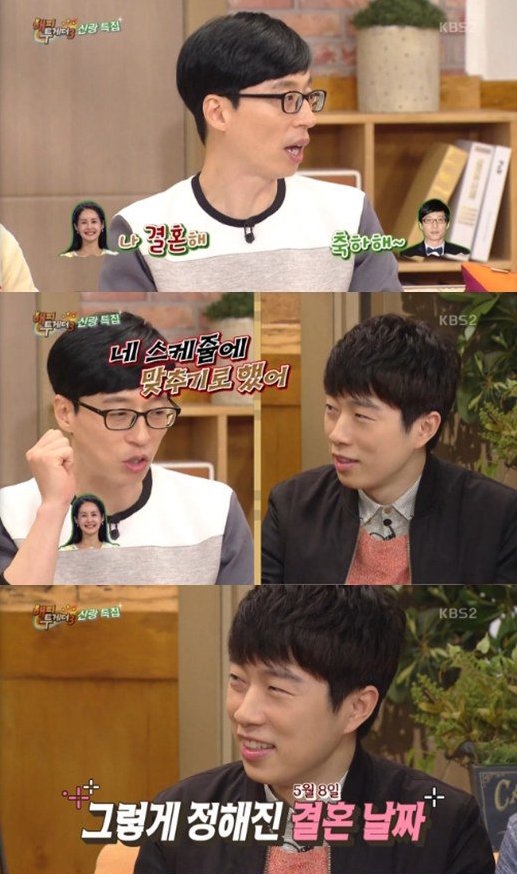 Kim Ga Yeon and Lim Yo Hwan recently welcomed their second child into the world in August of 2015.