Police drama “Live” has been touching hearts with its busy yet warm stories of the policemen of the Hongil Patrol Division. However, things took a more serious, saddening turn in the most recent episode.

The April 29 episode of tvN’s “Live” achieved average nationwide viewership ratings of 7 percent and peak viewership ratings at 7.9 percent. For viewers in their 20s to 40s, widely considered the target audience for programming, the episode achieved an average of 4.9 percent and a peak of 5.6 percent, which was the highest in its run yet. The episode also achieved first in its time slot.

The broadcast made viewers emotional with its depiction of the complicated emotions these police officers have to overcome in the name of duty. Even when nobody acknowledges their deeds, these officers still give it their all and dive headfirst into cases.

In the episode, the Hongil Patrol Division police officers faced off with a gunman. Their colleagues had already been shot and killed by the criminal. Despite their shock, they had to pull themselves together to catch the gunman. A heart-racing gun fight ensued, and eventually the criminal was killed by the bullets shot by Oh Yang Chon (played by Bae Sung Woo) and Lee Sam Bo (played by Lee Eol). 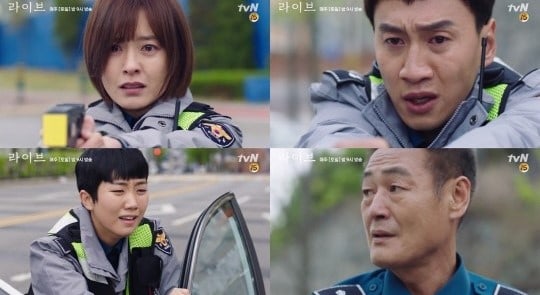 The police officers had to deal with the fact that their colleagues had died in front of them, and they hadn’t been able to do anything save to them. At the same time, they were also relieved that the rest of them had returned from the fight alive. The turbulent emotions from their brief encounter with death, the grief caused by their colleagues’ deaths, and the thought of their families all jumbled together and the officers sobbed their hearts out.

It wasn’t just the rookies, but the veteran officers also had a hard time dealing with their emotions as well. Oh Yang Chon said, with her eyes welling up with tears, “Thank goodness I’m not dead. Thank goodness the people in our division aren’t dead.” The others echoed her sentiments as they emotionally expressed their relief to each other. Emphasizing the weight of their responsibilities as officers of the law, Lee Sam Bo commented, “What did we expect? We’re policemen. If there are cases, we have to go.” 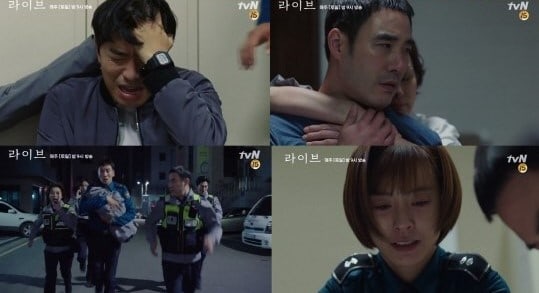 Amidst all the emotional turmoil, officer Han Jung Oh (played by Jung Yoo Mi) made up her mind to leave the division because she felt she wasn’t confident that she could face the continuous onslaught of cases. She also thought that she wasn’t a good fit with such a division when she felt she had no sense of duty. However, despite her inner conflict, when a call about an abandoned infant came, she still ended up going to the site.

Han Jung Oh eventually found the baby, but their temperature had already dropped quite a bit. The police officers moved as one to do everything they could to save the child, and Han Jung Oh began to cry and perform CPR. She narrated, “It was a scene where I wanted to quit immediately and I don’t have a sense of duty, but I desperately hoped that this child would live.”

“Live” airs every Saturday and Sunday at 9 p.m. KST.