Breaking: Lizzy Graduates From After School

On May 1, Lizzy officially announced that she is leaving After School.

In her handwritten letter to fans, Lizzy wrote, “As spring comes after winter goes, I’m writing to let you know about the beginning of the second act of my life.

“I did expect to graduate someday but although I’m in my ninth year as a member, it feels like my graduation came quickly. I was an everyday high school student before getting cast at the Busan Exhibition and Convention Center in 2009. I came to Seoul and was as a trainee, becoming a member of After School under the name ‘Lizzy’ in March 2010. Since then, I’ve also been active with Orange Caramel and After School Blue.

“They were really joyful, happy days that I spent with many people as if it were my world. Even as I’m looking back, they were truly the beautiful moments of my life.

“I’d like to thank Pledis Entertainment and its CEO Han Sung Soo who brought me up as Lizzy and led me to the place where I am. I won’t forget what you did for me and will always remain grateful.

“To the members who shared both my sorrows and joys, thank you and I love you a lot. And I’ll never be able to forget the moments that I’ve shared with Play Girlz so far. I’m really thankful and I love you. As much as you’ve shown your endless love for me, I’ll also try to improve and become a better me. Once again, thank you very much and I love you.” 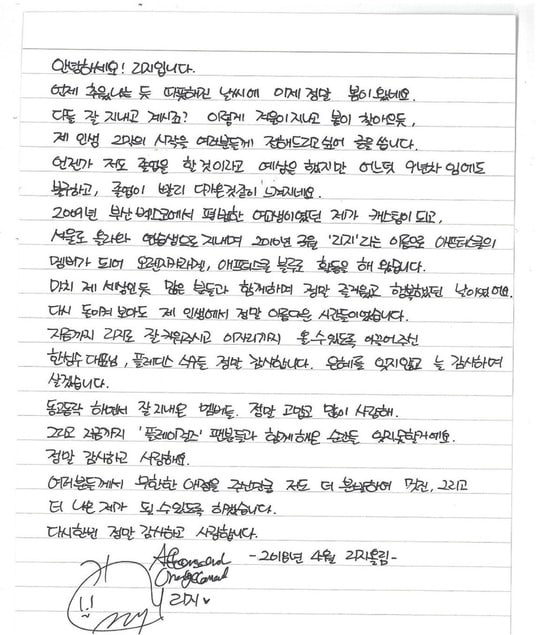 On the same day, Pledis Entertainment announced the expiration of their exclusive contract with Lizzy on the official fan cafe of After School and their official website. “We inform you that our contract with Lizzy has expired as of April 30, 2018,” they stated. “We have had meaningful conversations with Lizzy and after discussions, we agreed to end her management work with respect to her intention to pursue her dreams through various pursuits.”

They continued, “We would like to take this opportunity to thank Lizzy who has trusted and worked with us for a long time. Although our management work has concluded, we will support the future of Lizzy who will not only be a singer but actively take part in various fields.”

Pledis Entertainment also shared their goodbye on Twitter, posting Lizzy’s pictures and writing, “We support your future that will shine even brighter!”

Lizzy has been a member of After School for eight years. After being cast by Pledis Entertainment in 2009 when she was still a high school student, she came to Seoul and became a trainee. She achieved her dream of debuting in March 2010.

After School was originally launched as a five-member group consisting of Kahi, Lee Joo Yeon, Jung Ah, Yoo So Young, and Bekah in January 2009. After School has a graduation system in which members leave and are added, and the group became a six-member group when Uee joined in April of 2009. When Yoo So Young left After School in October 2009, Raina and Nana were recruited as the new members. Lizzy joined the group in the following year.

After School went through several changes after Lizzy’s debut, including the graduations of Bekah, Kahi, Lee Joo Yeon, Jung Ah, and Uee, and the addition of new member E-Young and Ga Eun.

Lizzy was also a member of the popular sub-unit Orange Caramel. Consisting of Raina, Nana, and Lizzy, Orange Caramel debuted in 2010 and became a hit for their fun and original concepts. She also promoted with the special sub-unit After School Blue.

With Lizzy’s graduation, After School is now a four-member group with Raina, Nana, E-Young, and Ga Eun.