EXO’s Kai was showered with love from fans all over the world as they expressed their well-wishes on Twitter!

Born on January 14, 1994, Kai (real name Kim Jong In) is celebrating his 25th birthday this year. As the clock struck midnight KST on his birthday, Kai expressed his gratitude in real time through a live broadcast as fans began trending hashtags to celebrate him. #HappyBearDayKai rose to No.1 on the list of worldwide trends, with #HappyKaiDay, #JonginHappyBirthday (in Korean) and #Jongin also in the top 10 worldwide trends. 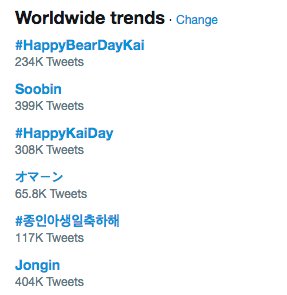 Check out some of the sweet tweets made by EXO-Ls!

To one of the bravest, strongest and most beautiful souls I’ve ever known, happy birthday. You’ve been through, achieved and grown so much the past years that I know there is nothing stopping you now. I will always be on your side rooting for you! ♡#HappyBearDayKAI#HappyKAIday pic.twitter.com/8zsShQk3Ka

because it is his birthday and he is a bear, let's bring back the video of him dancing and singing to the three bears song! #HappyBearDayKai pic.twitter.com/wSXb3Jzrro

Happy Birthday to the most precious bear who deserves to see all of the beauty that this world has to offer with his kind heart and nurturing attitude. ♡ #HappyKaiDay #HappyBearDay #종인아생일축하해 pic.twitter.com/qPvSIYsbCQ

Never forget when Sehun dedicated his daesang speech to Jongin and wished him a happy birthday ?????? #HappyBearDayKai #HappyKaiDay pic.twitter.com/gckTWlYj3i

Thank you for all the love that you spread. Thank you for being a source of happiness to a lot of people. Hope you can stay happy and fulfill all your wishes in the coming years!! #HappyBearDayKai @weareoneEXOpic.twitter.com/9rrecc5i9L