Given the recent news surrounding Red Velvet Irene‘s controversy for her past behavior, many have stepped up to give their side of the story. While some continued to call her out, others have defended the singer.

Some staff at Soonsoo, a salon that Red Velvet has been going to for years, also spoke up. The salon is famous for handling the styling of various celebrities, including Girls’ Generation and Suzy.

#Irene… People have asked if there were any happenings in the salon… Of course, given that they have been attending our salon for a long time, there will be talk~ But Irene is someone that there are many good anecdotes about~ During year-end periods, she will write letters to thank the staff, and even gave vitamins to the maknae staffs~ She’s a celebrity that knows how to thank people~ Gifts aren’t everything but her character is good on the norm too, so many hair and makeup staffs like Irene~ As she is a celebrity that has more good sides to her, I think the situation is a pity~ Irene… Fans know it already but she’s a good person~ I hope that this post, although it is short, will become a small strength to her… #Irene #HaveStrength 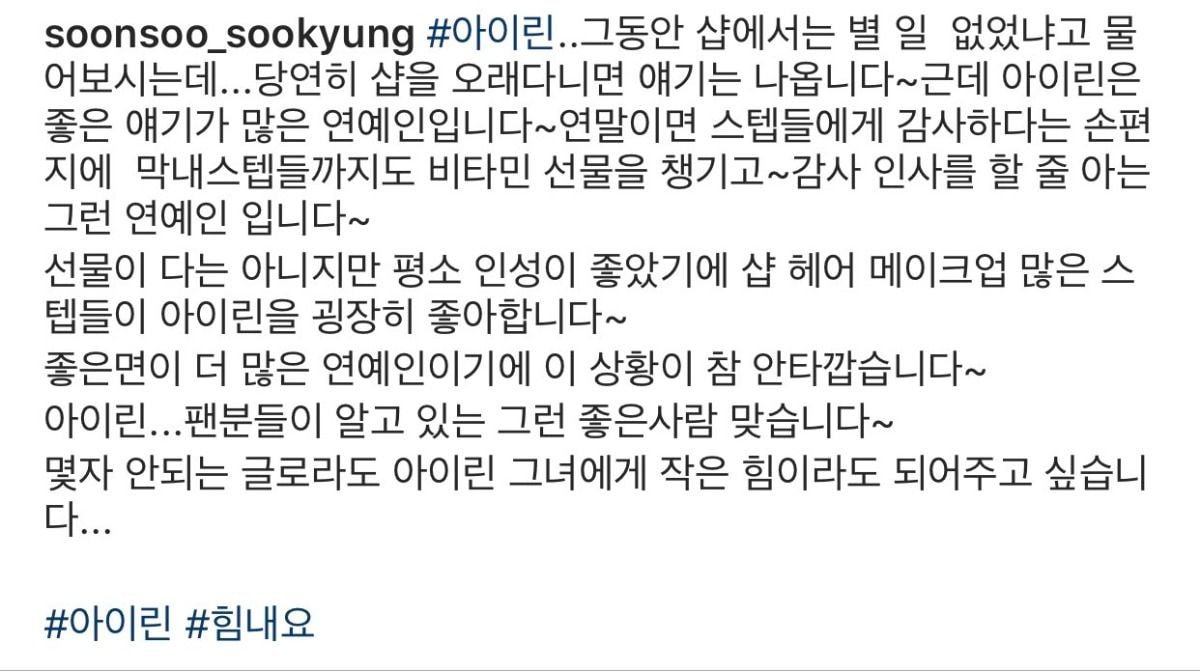 Another makeup artist wanted to speak up to prevent further misunderstandings regarding Irene’s character.

#MyForestOfTreesIrene Although she’s younger than me, Irene has always been a forest of trees to me ~ I’ve been with Red Velvet for over 6 years, since their debut and we have grown together. Since I gave birth in 2015, there were many things that changed in my life as a makeup artist and there were many difficulties and new things I was experiencing. But Irene, who’s severely shy and curt, became a forest of trees for me that I could share my secrets to and trust she wouldn’t tell anyone.

One day, she came to the salon just to greet us because she was passing by, so we sat together and talked. On my way home, I put my hand in my jacket pocket and realized there was a card inside it. The contents were very Irene-like and she also delivered it in a very Irene-like way. The card just seemed like her. She’s a person that is warmer than anyone. Although I’m not sure what happened that resulted in the current situation, I believe that the truth will prevail. I hope to become a strength to Irene just like how she was a forest of trees to me. 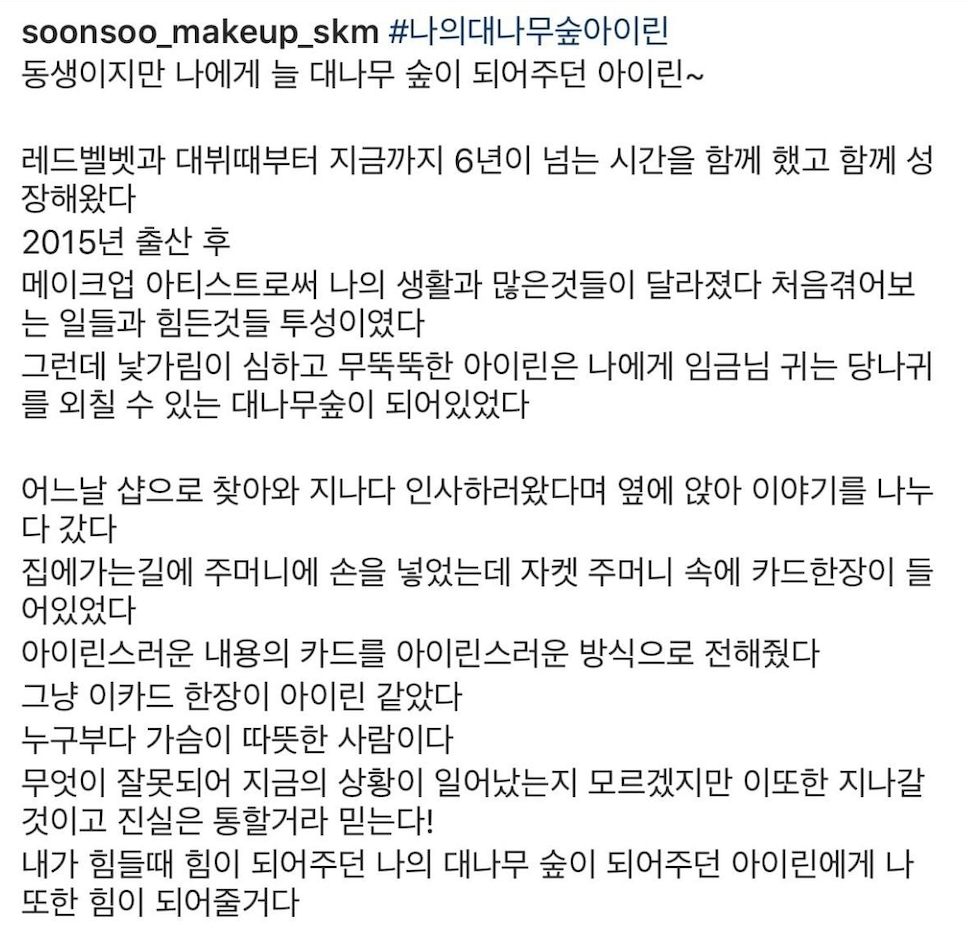 One of the hair stylists that has worked with Red Velvet for 5 years also posted an explanation.

Hello. I am Yoon Seo Ha, who has been with Red Velvet as a hair staff since 2015. Through working with the members for a long time, I don’t think there has been a moment where we did not treat each other with sincerity. In this long period, we’ve experienced times of loyalty and gratefulness and thanks to that, I also feel that I’ve grown. Irene, as a leader, gave me trust and a sense of pride to be able to work as Red Velvet’s hair stylist. As someone that has seen her through a long time, I can say that she is someone that gives people a sense of trust and accuracy, no matter what the situation. I am someone that would have quit already if I had experienced any unfair situations as someone that sees them more than I see my own family, throughout the years. Staff that have worked with Red Velvet for a long time will know. Because she is in the team, the staff and members are able to depend on each other and become a strength to each other, beyond just formal work.

Irene, I’ve always said this, but you’re an artist, friend and dongsaeng that has always been a strength to me. I’m thankful every day! #Irene 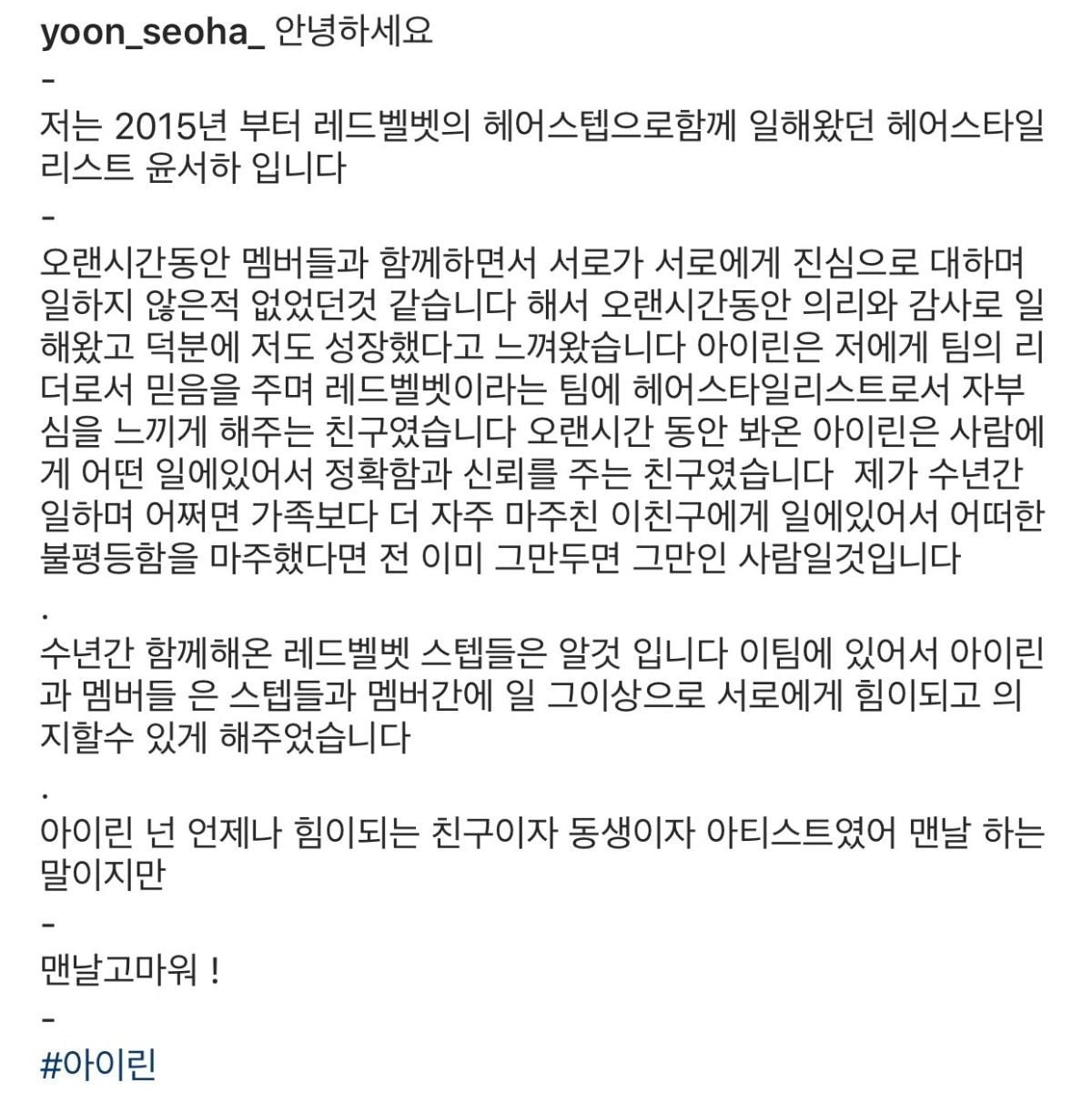 This team had also styled her for this particular event that people suspect could have sparked off the controversy. Irene has already uploaded a personal apology to her Instagram.

Paul McCartney Endlessly Praises BTS And Compares Them To His Legendary Band, The Beatles

16 Photos That Prove K-Pop Skirts Are Only Getting Shorter

Paul McCartney Endlessly Praises BTS And Compares Them To His Legendary Band, The Beatles

TWICE’s Nayeon Once Cried Onstage During A Performance, Here’s Why