The press conference for upcoming JTBC drama “Man to Man” took place on April 18, and the cast and crew of the drama talked about following in the footsteps of JTBC’s popular drama, “Strong Woman Do Bong Soon,” which recently came to an end with impressive ratings.

“Strong Woman Do Bong Soon” consistently had strong ratings throughout its entire run and rewrote JTBC history by becoming the network’s most watched drama of all time. The drama almost broke the 10 percent mark and has become the pride and joy of JTBC, as the network has previously always been pushed into second place by tvN in the Friday-Saturday time slot. 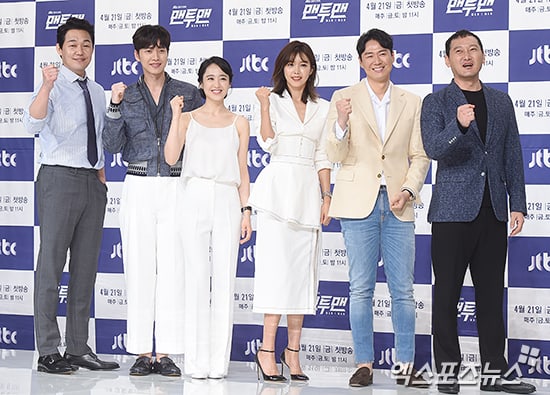 Regarding how they feel about taking on the time slot that “Strong Woman Do Bong Soon” previously occupied, PD Lee Won Suk said, “‘Strong Woman Do Bong Soon’ achieved greater results than anyone had anticipated. I would be lying if I said that we don’t feel burdened by it; however, that drama was very helpful in establishing JTBC’s presence in that time slot. Although we are envious of the viewer ratings that ‘Strong Woman Do Bong Soon’ received, ‘Man to Man’ is a drama that has a very different tone and so viewers will be able to experience something new through this drama.”

He continued, “Although the drama has been presented as a spy drama, it’s actually a comical melodrama. The drama itself isn’t complicated or difficult but is rather, in contemporary terms, better described as ‘byung-mat’ (insane, crazy). It’s a drama that viewers will be able to watch comfortably and without any burdens.”

Actor Park Hae Jin also chimed in about why he chose the drama and said, “There was absolutely no reason for me to not do the drama. I received the script from writer Kim Won Suk and thought that it was a very fun project. It reads like a spy drama but is not as heavy as a normal spy drama.”

Meanwhile, “Man to Man” will begin airing this Friday, April 21 at 11 p.m. KST and will be the first Korean drama to ever be broadcast internationally in real time on Netflix. Plus, check out the latest trailer for “Man to Man” here!