MBC’s new Monday-Tuesday drama “Partners for Justice” has revealed the relationships between its characters!

Directed by Noh Do Chul of “Ruler: Master of the Mask” and written by Min Ji Eun and Won Young Sil, “Partners for Justice” is about the cold perfectionist forensic doctor Baek Beom (Jung Jae Young) and the passionate but clumsy rookie prosecutor Eun Sol (Jung Yoo Mi), who comes from a wealthy family.

The relationship chart revealed on May 9 reiterates how these two characters cooperate with each other to solve cases. While they do work together, it was previously revealed in a teaser how Baek Beom and Eun Sol don’t exactly get along, with tensions running high at any given moment.

Rounding out the trio is homicide detective Cha Soo Ho (Lee Yi Kyung). Cha Soo Ho is notably interested in researcher Stella Hwang (Stephanie Lee), who is a work colleague of Baek Beom at the National Institute of Scientific Investigation.

Star prosecutor Kang Hyun (Park Eun Suk) not only works at the same district prosecutors’ office as Eun Sol, but also is her college senior. Beyond their professional relationship, Eun Sol also happens to be Kang Hyun’s first love. However, Kang Hyun has a hostile relationship with Eun Sol’s “teammate” Baek Beom, one that was caused by a mysterious event.

Other characters introduced include some of the other people at the National Institute of Scientific Investigation, the Eastern District Prosecutors’ Office, the Gangdong Police Station, and Eun Sol’s family. 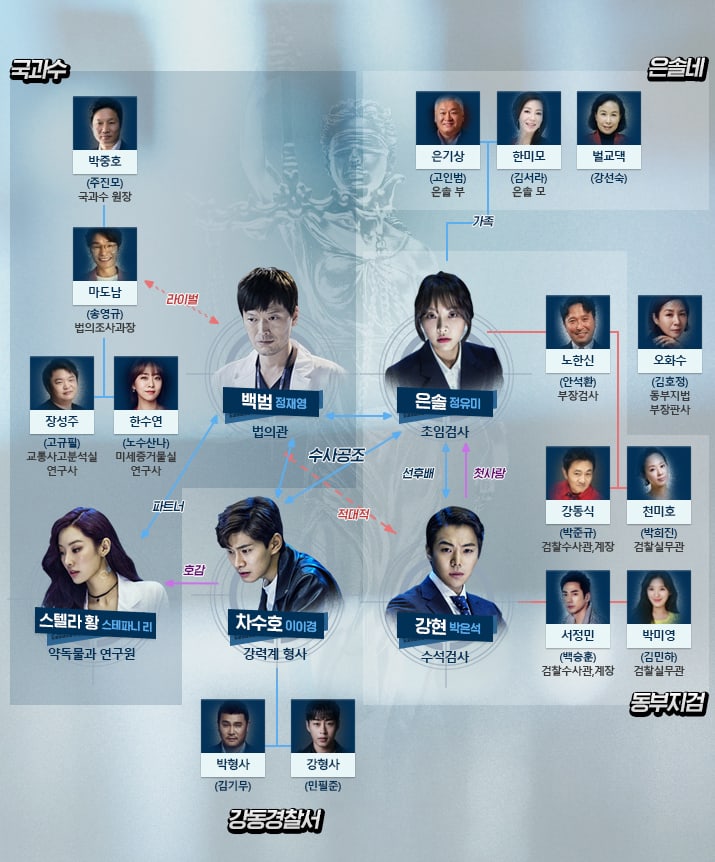 A source from the drama explained, “We wanted to preview the complicated relationships between these characters in order for viewers to be able to enjoy watching [the drama] more. Please look forward to seeing how the stories of these people will unfold.”

“Partners for Justice” will premiere on Monday, May 14 at 10 p.m. KST and will be available on Viki!