The MC of a college festival and the student union have apologized to TWICE for the MC’s poor word choice following the girl group’s performance.

On May 11, TWICE performed at a festival at Sungkyunkwan University’s Humanities and Sociology Campus. After they performed their final song, the MC said, “Everyone. TWICE won’t come if you say ‘encore.’ At times like this, you have to say ‘service, service.’”

Many students criticized the MC’s actions on social media on the day of the festival. People who attended the event explained that it was inappropriate and others heard and watched what happened through fancams that were posted online.

The English word “service” is used in Korean to describe something given free of charge when a purchase is made, but it can also have a negative connotation in a different context.

On May 14, at the request of the student body, Sungkyunkwan University’s Humanities and Sociology Campus Student Union released a statement along with an apology from the MC on Facebook.

The statement reads as follows:

“Hello. This is Sungkyunkwan University’s Humanities and Sociology Campus 50th Student Union ‘S:with.’ The 2018 school festival safely ended with the help of many students. Before expressing our gratitude, we wanted to first apologize to those who felt uncomfortable by the MC’s remarks on stage on May 11, the last day of the school festival.

“On that day, after the end of TWICE’s performance, the audience shouted ‘encore’ to request an additional song. During this, the MC cut off the audience’s chants and continuously used the word ‘service.’ It is not a word ordinarily used when requesting an additional song, and the artists, as well as the school members, expressed discomfort in the use of the word that was not suitable for the situation.

“Since the school festival is an event that is representative of our school, the Student Union was careful in selecting the MC and used many methods such as examining the past experiences of the MC and what events they had emceed. In addition, after the selection of the presenter, we asked him more than once in meetings before the event to pay attention to any remarks that may be sexist or socially controversial. Despite the continuous efforts of the Student Union regarding the MC’s manner of emceeing, we have made many people feel uncomfortable by the poor word choice of the MC. So, the Student Union asked the MC of the final night of the festival for a written apology.

“We as a student union will conduct the processes set in place such as checking past experience or preparing them beforehand more thoroughly when choosing a MC so that the same problem listed above does not happen again. We will not be lazy in preventing problematic situations from happening at all events under the supervision of the student union.

“We want to apologize once again to those who were uncomfortable by the MC’s remarks. We would like to thank the school members for making the 2018 school festival safe and fun for the last three days. Sungkyunkwan University’s 50th Student Union ‘S:with’ will constantly work hard and be with our fellow students by doing our best. Thank you. 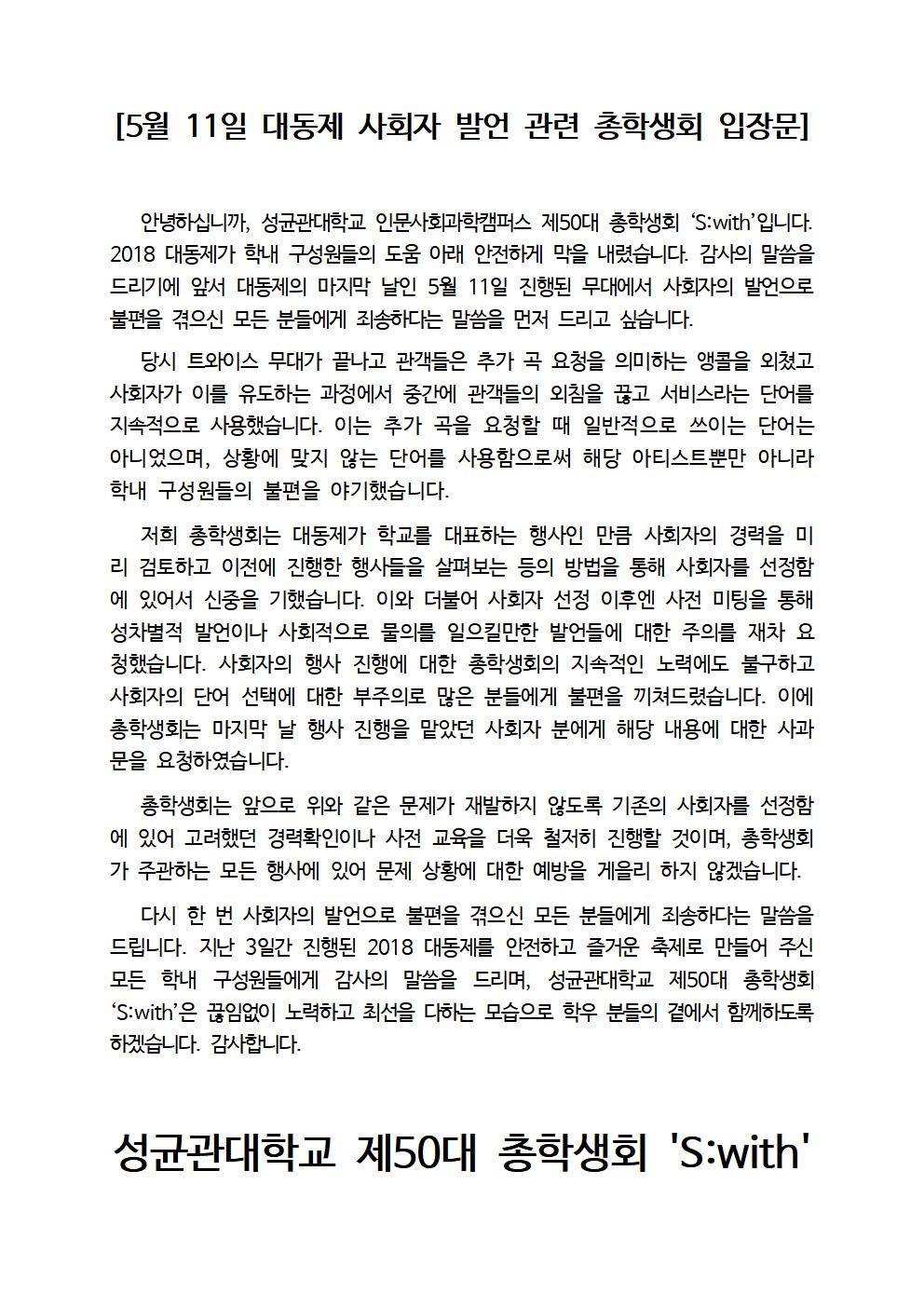 The MC’s written apology is as follows:

“Fellow students of Sungkyunkwan University, student body who put all of their efforts into preparing for the festival, TWICE, and fans, I sincerely apologize for causing you discomfort.

“It was a big honor to announce guest singers TWICE at the Sungkyunkwan University school festival on May 11.

“When I arrived at the venue two hours prior, many fellow students were already there waiting to cheer for and closely see TWICE, who would be on stage in five hours. I could feel their passion while seeing them waiting. So, I wanted to do all that I could and try my best to create good memories for the students.

“There was also a time when I waited for hours to see a singer that I liked at a university festival during my college years, so I wanted to do the best that I could.

“Seeing the students cheering for TWICE, I thought that it’d be nice if the guest performer sang another song. After the final song ended, many people shouted for an encore. Instead of the word encore, I thought of how stars give fans fanservice and prompted [the crowd to say] that. However, I didn’t think that it would be seen in another way, differently from my intentions. I know that I cannot ease the minds of those who were hurt and upset by it, so I feel more apologetic. It was my inexperience and inadequacy. I sincerely apologize to everyone.

“I’m so sorry that I caused the fellow students and fans concern on a good day. As the host, it was a poor choice of words.

“I bow my head and sincerely apologize to the students and Sungkyunkwan University student union, TWICE, and fans who were hurt by this. I’m sorry. I’ll be more careful in the future. I’ll work hard to not disappoint many people. I’m sorry again. 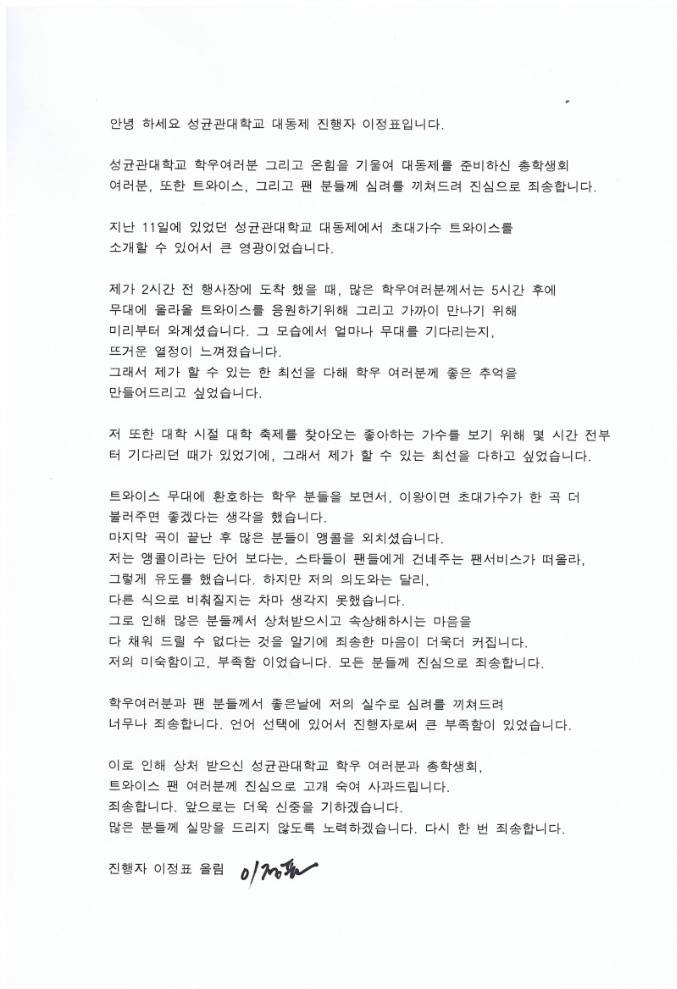