On the December 24 broadcast of JTBC’s idol survival show “MIXNINE,” results of the female formation battle were revealed. The female contestants were notified that winning teams of the battle would receive a benefit of 3,000 to 10,000 points.

Fifth place went to the Honey Sleep Team that performed KARA’s “Honey.” After the results were announced, Lee Hyang Sook said, “Our team really wanted to receive the benefit, but can’t because we are in fifth place. I feel regretful and apologetic.”

Fourth place was awarded to the Lucky Goddess Team who performed Girls’ Generation’s “Genie” and received a benefit of 3,000 points. Kim So Ri said her team guessed correctly on most of the results and want to work harder for better results next time.

Third place went to the Girlfriend Team who performed S.E.S’s “I’m Your Girl” and received a benefit of 5,000 points. 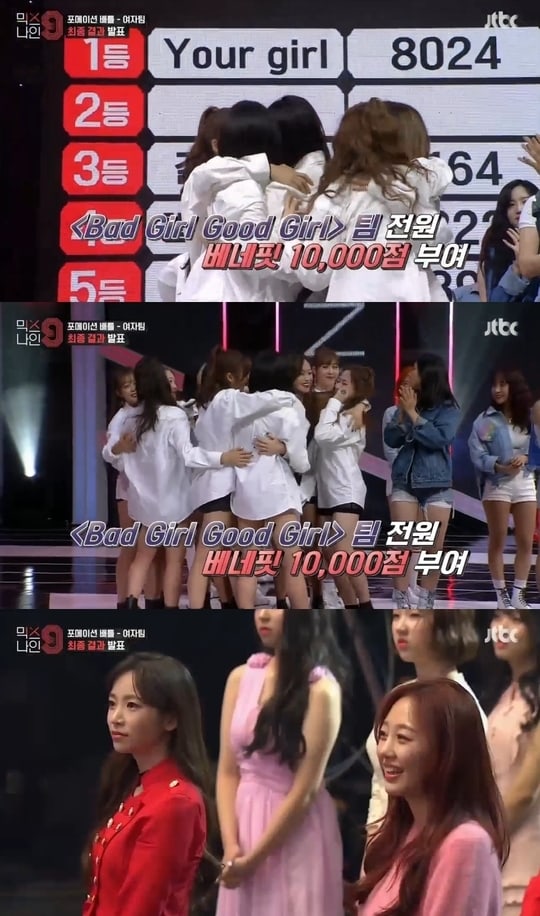 The Finding Really Team had some well-known contestants such as Shin Ryu Jin and Lee Soo Min. Their team performed WINNER’s “Really Really” and were expected to come out on top. However, they came in second place and received a benefit of 7,000 points.

The coveted first place and benefit of 10,000 points were awarded to the Your Girl Team who performed miss A’s “Bad Girl Good Girl.” Hwang Ji Min commented, “I worried a lot because the opposing team had three members from the debut team and many well-known contestants, but our teamwork was really good.”