On the November 7 episode of MBC Every1’s “Weekly Idol,” the members of MONSTA X revealed secrets and aired their grievances with each other.

MONSTA X, who arrived to the “Weekly Idol” set in their stage costumes for “Shoot Out,” went to change clothes in pairs after completing the “Weekly Idol” dance challenge. Shownu was the first to leave, at which time Kim Shin Young introduced the first game called “bitter talk,” where the remaining members could take the chance to get something stressful off their chest about Shownu.

Hyungwon kicked off the discussion, saying, “You know put on your glasses after showering at the end of the night? If Shownu puts on his glasses, he won’t leave the house for anything.” Jooheon said, “Once, I called him and asked where he was. When he said he was at home, I asked him to come out. He just said, ‘I put my glasses on.’” 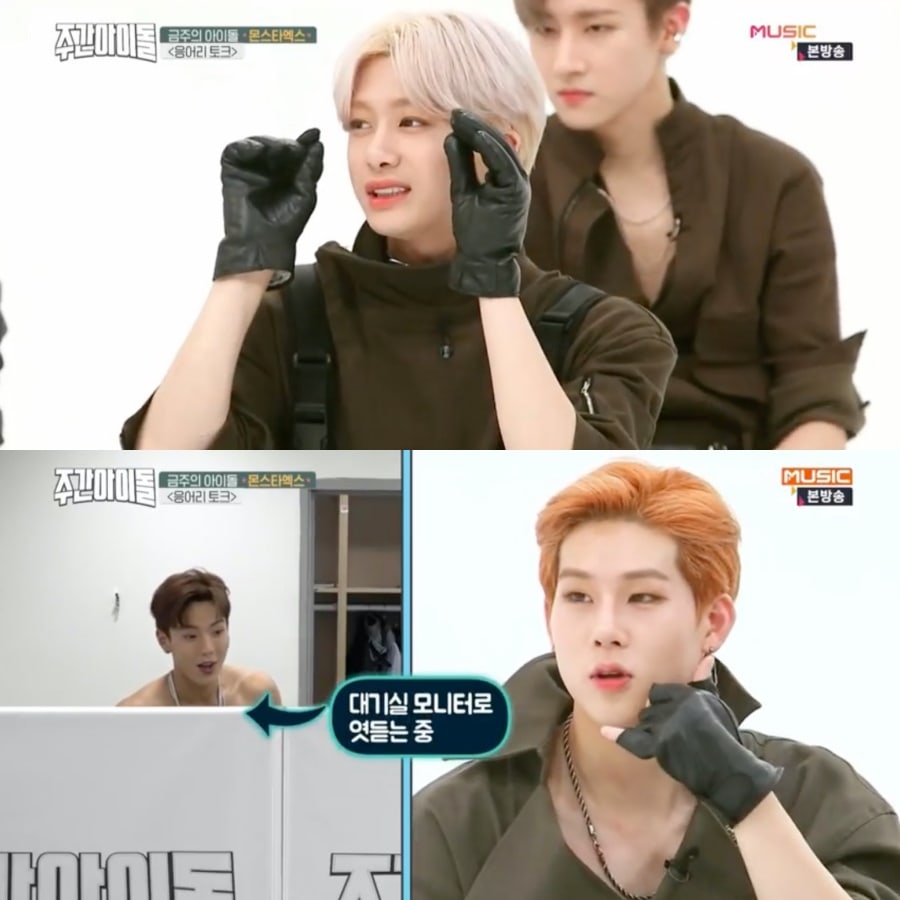 Shownu returned, and Jooheon and Kihyun were the next to go change. Knowing that they would be talked about as soon as they left, the two members headed to the changing rooms in jog.

Minhyuk talked about Jooheon, and said, “You have to tell Jooheon he is doing well for him to do even better. If you tell him he’s not doing well, he’ll get really discouraged. He gets upset easily.” When asked what makes Jooheon the most upset, Minhyuk said, “When you don’t answer his video call. Jooheon really wants to be loved. Even if we’ve been with each other all day, if he’s away for a little bit, he’ll video call, and if you don’t answer, he’ll get mad.”

Wonho added that once when he asked Jooheon for a favor, Jooheon rejected. “When I asked him why, he said it was because I didn’t answer his call.” 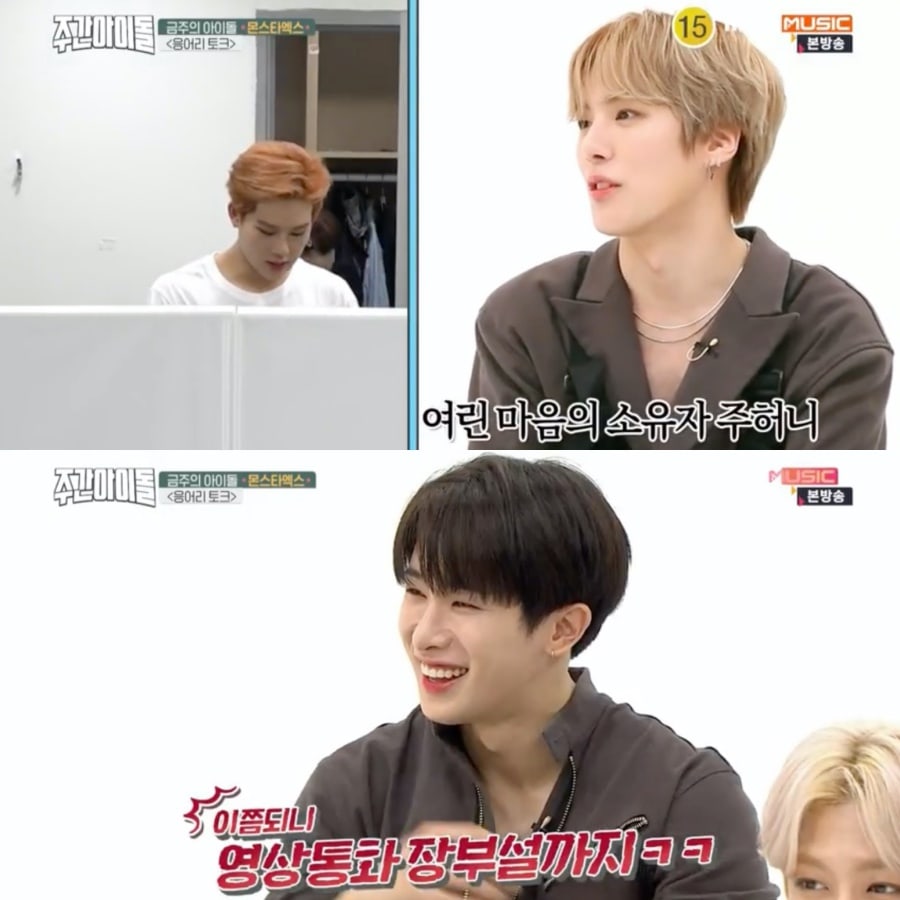 Jooheon and Kihyun came back and chose Wonho and I.M as the next members to leave. Wonho and I.M, afraid of what would be said about them, sprinted to the dressing rooms.

Kim Shin Young asked if anyone had anything to share about Wonho, and Hyungwon immediately raised his hand. He said, “Wonho has a great body, right? He’ll sometimes look at me and compliment my body, saying I look really good and that he wished he had my physique, but it doesn’t really make me feel that great. It’s not something bad, so I can’t complain to him and just say thank you, but it’s a little…” 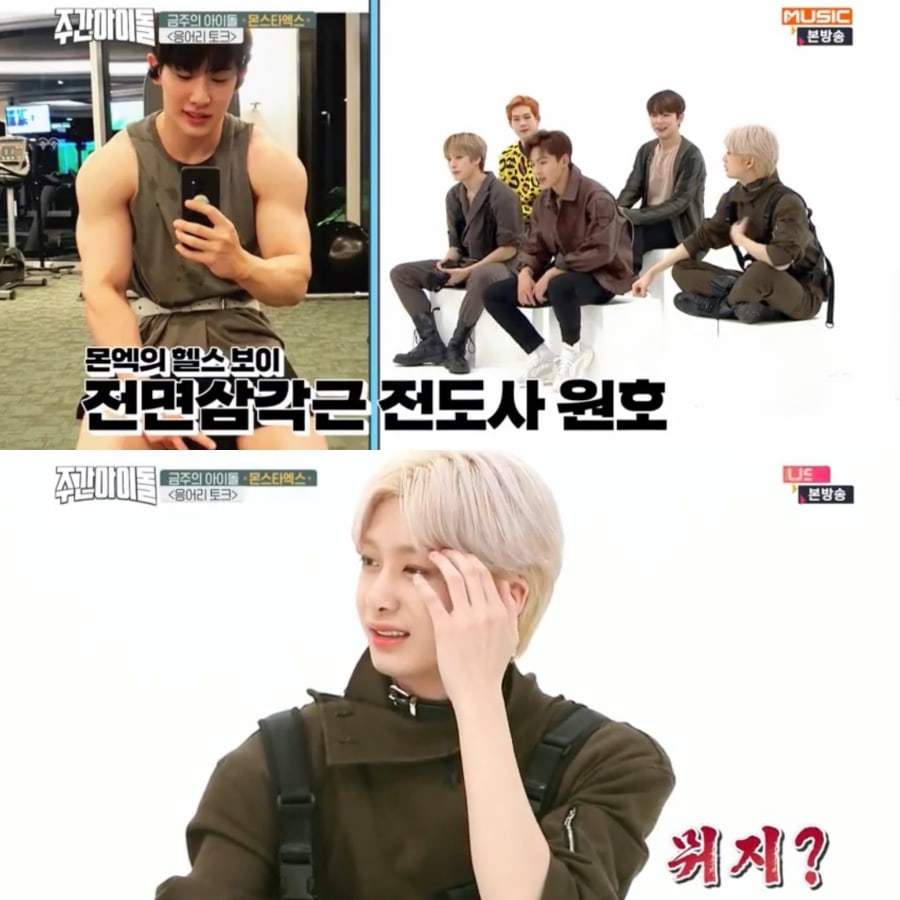 Kihyun then shared a story about I.M. “The computer room is right by my room, and one morning, I heard someone clicking away at a keyboard in the morning. I’m really sensitive. So I got up and I opened the door, and I.M was in the chair gaming, completely naked. I was so surprised.”

Hyungwon jumped in, “You know when someone comes back after living abroad? A person’s mindset and lifestyle can change. But [I.M] lived in the U.S. for about three years. In my opinion, it’s a little too short of a time period to completely become an American, but when it comes to things like this, he’s so different.”

Jooheon added that during their promotions in the U.S., I.M is a like a leader with his ability to speak English. “But his voice changes [when he speaks English]. It gets really low, and I wonder if that’s entirely necessary.” 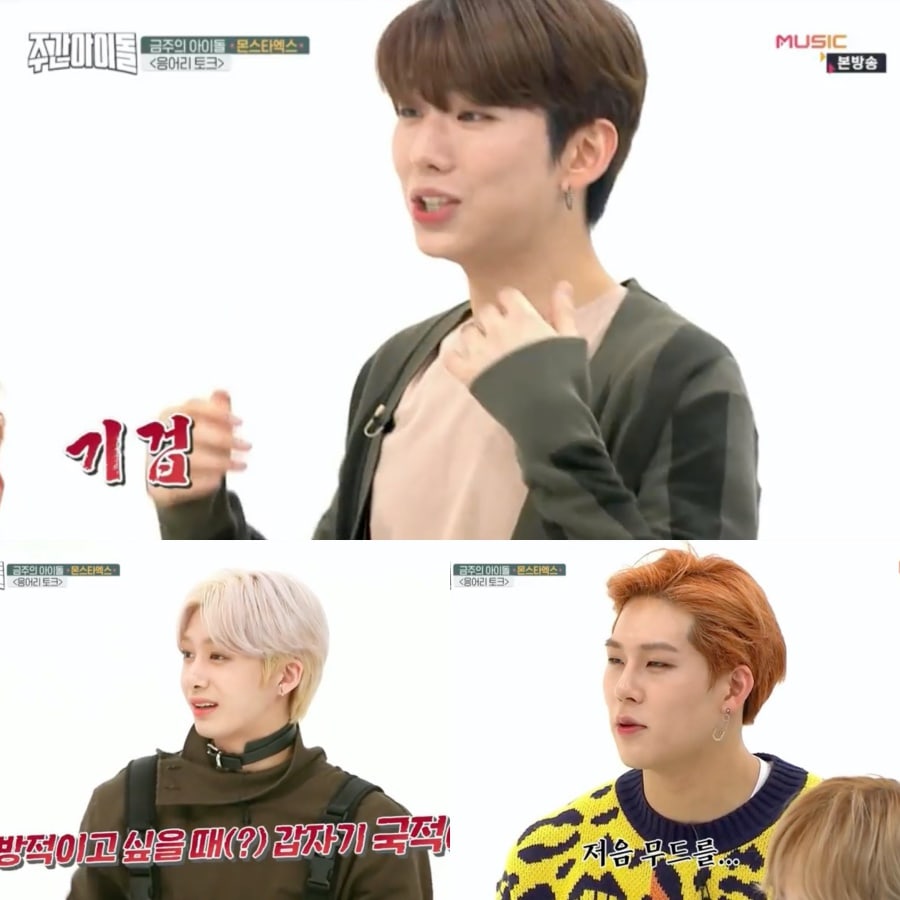 The final members to go change were Minhyuk and Hyungwon, who also took off at a sprint.

Immediately, Jooheon said, “I like everything about Minhyuk, but I wish he would talk a little less. You know when you think someone’s done talking, but then they keep going?” I.M agreed, and said he himself is more of the type to listen, so when he’s talking to Minhyuk, the conversation ends before he gets a chance to speak.

Hyungwon doesn’t like to carry his own things, said Jooheon. “If we go on a world tour, he puts his things in other people’s bags, or intentionally doesn’t bring his own. Even with lenses, he definitely has a ton, but when we’re abroad, he’ll come over and ask if we have any.”

Kihyun said, “My prescription is similar to Hyungwon’s, and he knows that I always have extra lenses with me.” 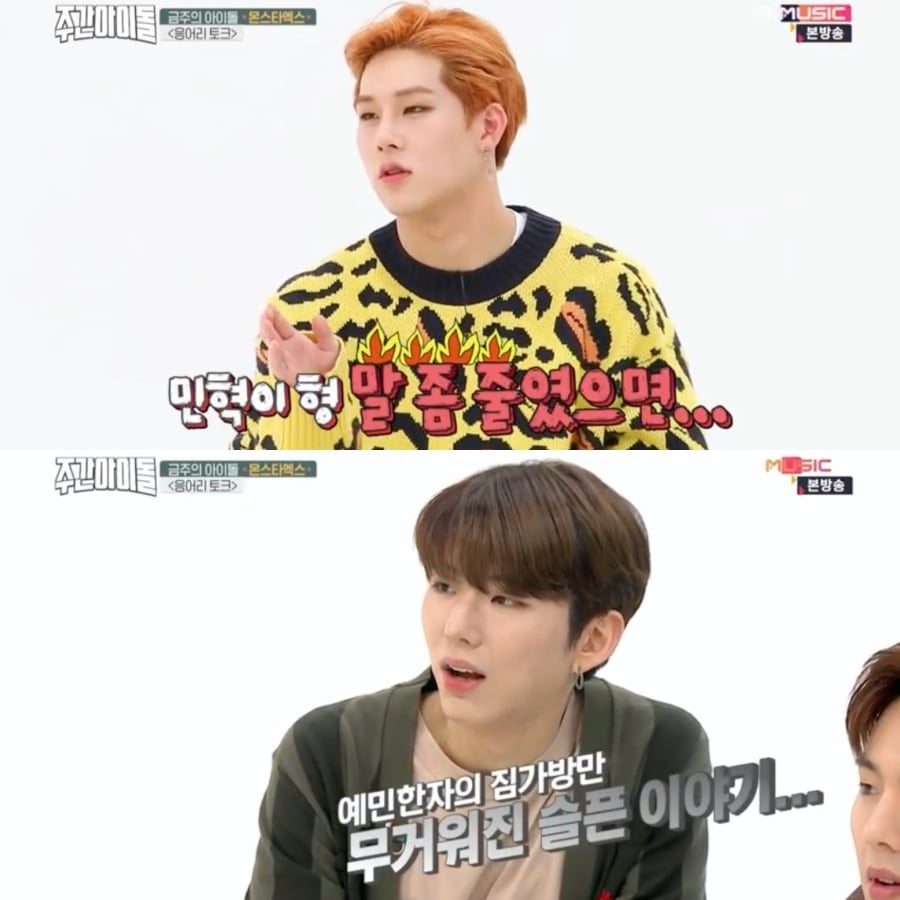 The members also had the chance to say these things face-to-face. Though the game was initially set for two members to speak to each other at a time, holding hands, it sometimes became three or four to a circle, as more than one member had something to say.

Seeing how candidly the MONSTA X members were able to talk to each other, Kim Shin Young commented, “This just shows how close you guys really are.” 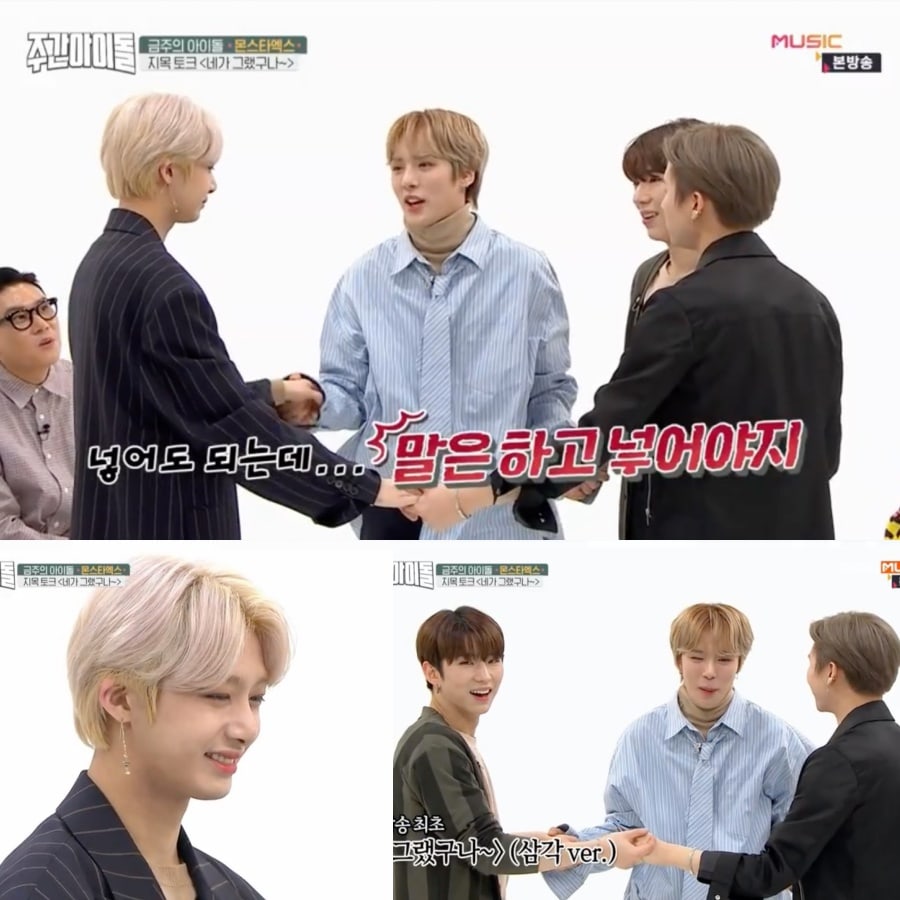 Don’t forget to check out MONSTA X and Grammy-nominated singer Gallant (and their amazing duet of MONSTA X’s “Beautiful”) in the Viki Original mini documentary “When You Call My Name“!