MONSTA X On Their Success In 2018, Collaborating With Steve Aoki, And More

At an interview with news outlet Star News, MONSTA X talked about their activities from last year, including promotions with “Shoot Out” and performing at the iHeartRadio Jingle Ball Tour 2018. They also shared some new information about their upcoming album and their goals for 2019.

MONSTA X began talking about receiving an award at the Asia Artist Awards (AAA) for the second time. Wonho said, “Just being invited to the ceremony is something we’re grateful for. I was happy to receive an award for the second time in a row, but I was even happier that we received an even better award. The Best Entertainer Award [from 2017 AAA] seemed like an award for the artist of the next generation, while the Best Icon Award [from 2018 AAA] made us feel like we had truly become icons.”

Late 2018 and early 2019 was a hectic period for MONSTA X. According to Wonho, they had “Shoot Out” promotions, end-of-year awards ceremonies, the Jingle Ball Tour, new album preparations, Japanese comeback preparations, and fan meeting preparations happening all at once.

Joohoney said, “Many people use broadcasts as a way to determine how busy we are, but in 2018 we really worked without resting. This sort of pattern always continues, so we can predict when we’ll be given work. Of course, we know our fans want to see us. If we don’t promote, we have fewer opportunities to communicate with our fans, so promoting often is good for us.” “Of course, resting is important too, just like the way your muscles get cramps if you run continuously. Eating well is also important,” added Wonho.

Minhyuk explained, “All of the members tweet everyday too. When we’re not promoting, we upload photos and tell fans that we ate. If we don’t communicate with fans, it feels like we’re growing apart and that they’re waiting for us,” and I.M gave his opinion on the matter saying, “Honestly, there are also hardships during promotions. It would be a lie if I said there weren’t.”

As their most memorable moment from 2018, they chose their four music show wins with “Shoot Out.” 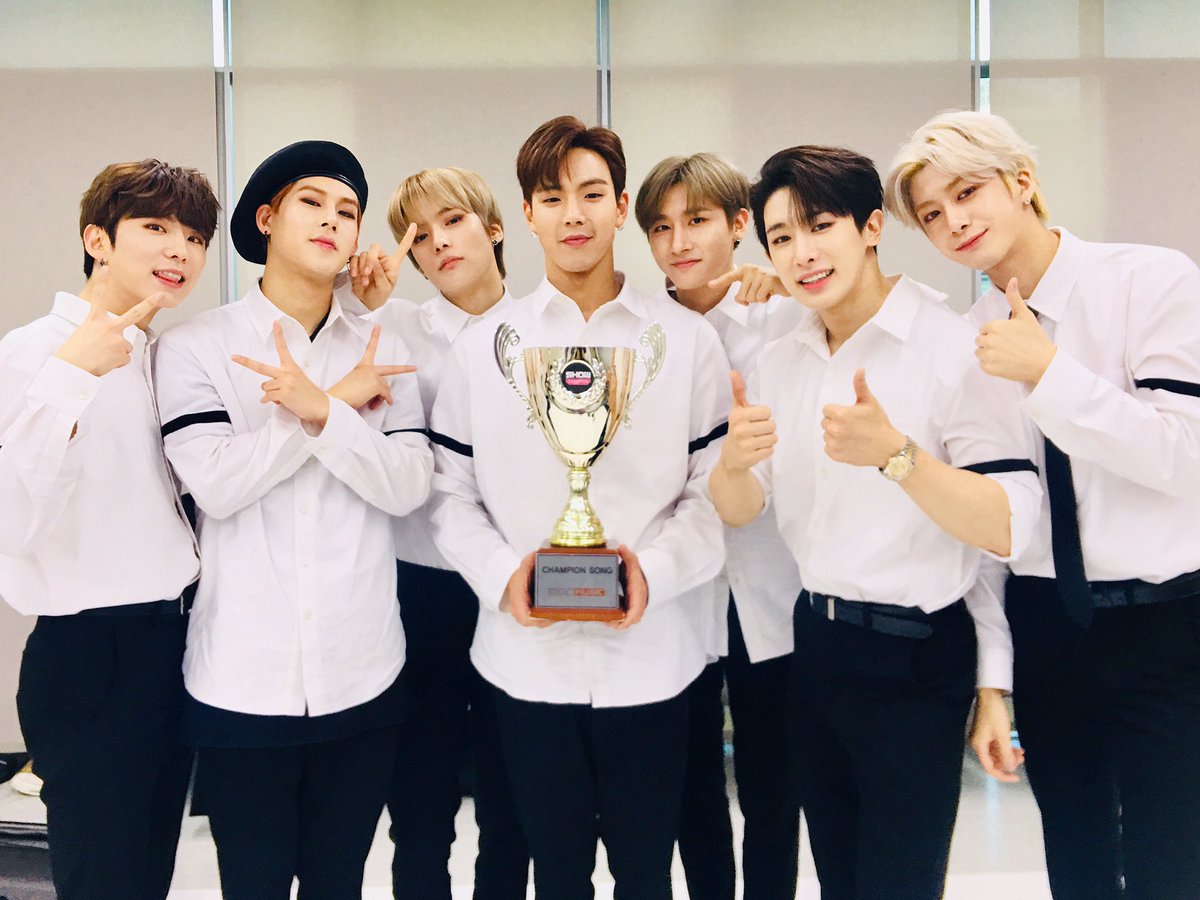 Kihyun looked back on MONSTA X’s promotions from their survival show “NO. MERCY” to being invited to perform at the Jingle Ball Tour. He said, “We filmed our comeback music video a few days ago, and the set was at the same place we filmed our debut survival program. I don’t have a good memory of that time because I was having the hardest time of my life, but going back there made me think, ‘After coming to this place, I’ve worked hard without stopping.’ Recently I was talking to some of my acquaintances, and I realized that so many groups are unable to attend awards ceremonies. I had become desensitized to that. I really felt thankful for our fans and thought that we had done well during the four years we’ve been active.”

Minhyuk revealed, “Honestly, after debuting, I never really thought, ‘I’m glad I became a singer,’ or ‘We even get to do something like this?’ but performing at the Jingle Ball Tour, taking pictures with famous people who appear on commercials there, and talking to them at the waiting rooms made me have those thoughts.”

MONSTA X is on their way to becoming a senior idol group, as they are nearing their fourth anniversary. Hyungwon shared that he was surprised to know that they were second oldest group on the most recent “Idol Star Athletics Championships.” Minhyuk also revealed, “Artists often give out their new albums to other artists, and we’ve had male junior idol groups draw us pictures and write us long letters saying they want to become like us and get on good terms with us. Our dance instructor told us that some of the trainees he taught had Wonho and me as their computer wallpapers (laughs).”

Asked where they thought they stood in the competitive Korean music industry, Wonho responded that they were one of the Top 10 and found numbers to back up his claims. “Based on album sales, sales on streaming sites, number of wins on music shows, and other factors, I think we can make it into the Top 10, but not the Top 5. The Top 5 is undefeatable,” he said.

MONSTA X then shared some stories behind their experience at the Jingle Ball Tour. Joohoney said, “We met lots of celebrities, including Shawn Mendes, who was really good-looking,” and Kihyun added, “Many stars came up to talk to us first. Camila Cabello also greeted us and took photos with us.” 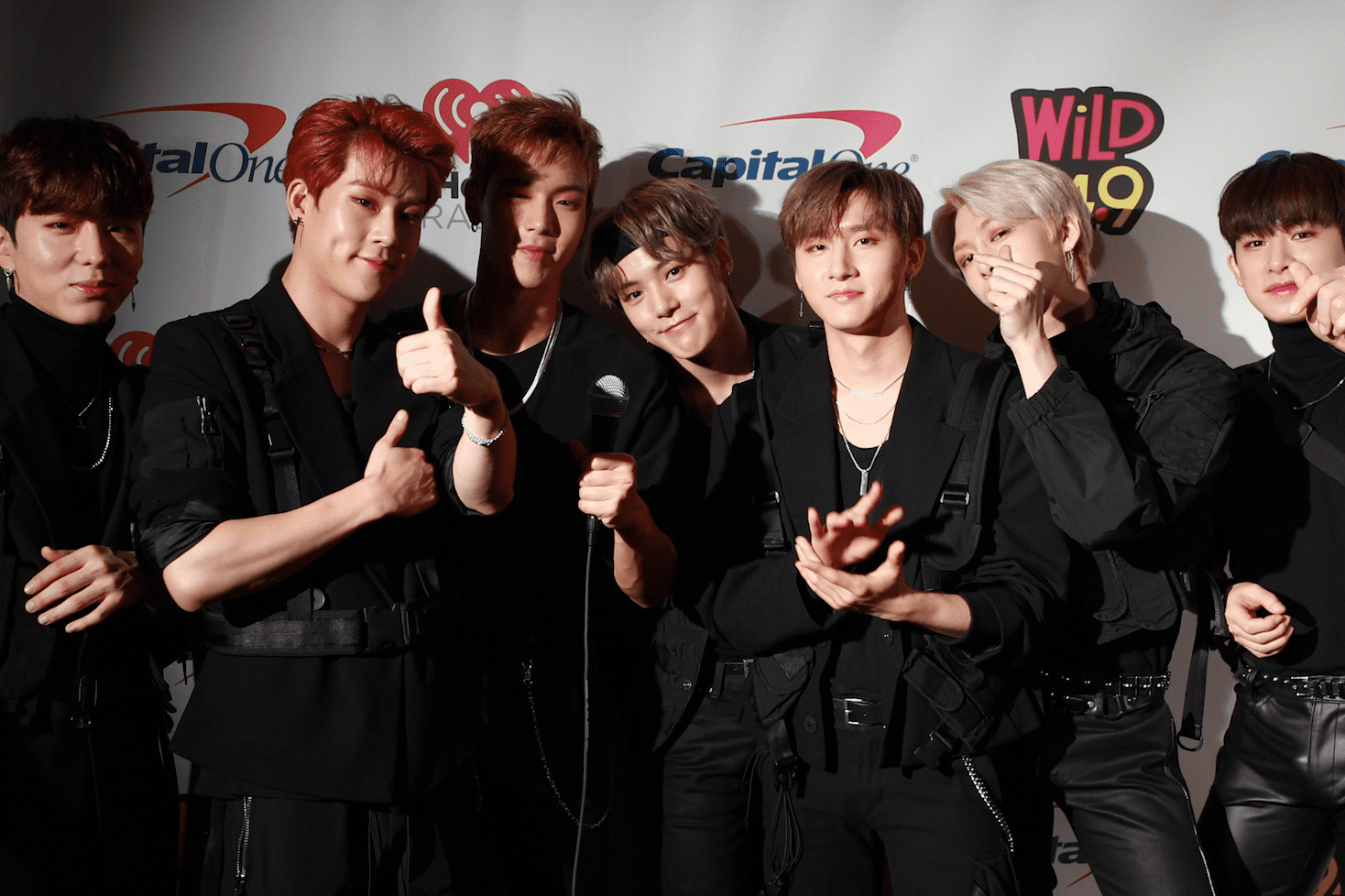 Moving on, the group revealed some information about their upcoming album “Take.2: We Are Here.” Minhyuk began, “We’ve been preparing for this album ever since ‘Take.1: Are You There?’ came out. The title song is ‘Alligator,’ and the lyrics metaphorically talk about making someone ‘fall into my marsh’ in the way an alligator doesn’t let go of its prey.” Regarding the concept, Wonho and Joohoney explained, “It has a wild feeling. It creates a flurry in a sophisticated way. The sound is powerful to the extent that it might be loud, and it’s also aggressive. Our second EP generally deals with the concept of good and evil, but in this part of the album we focused more on the appearance, rather than the story. Part one of the EP opens the door, and part two reveals MONSTA X’s world.”

“Take.2: We Are Here” will contain “Play It Cool,” their collaboration track with Steve Aoki. I.M and Joohoney shared, “We had a video call with him recently. We asked him why he chose us among so many skilled artists, and he told us, ‘You guys are cool. You’re MONSTA X.’ He was really cool. We met him during our world tour too. We told him we wanted to see his studio in Las Vegas, and he said, ‘Of course, you should come.’ He really seems to like K-pop fans, and it made us realize how powerful K-pop is.”

Kihyun shared a little more about the song, stating, “It’s a really nice song that’s a bit different from MONSTA X’s usual music. It’s a deep house track with hints of future bass.” Minhyuk said, “Starting with this collaboration, we might be able to work with Steve Aoki on more songs. He’s a gentle and nice guy that seems like a friend you might find in your neighborhood.”

Lastly, MONSTA X talked about their goals for 2019. Wonho expressed his hopes to receive the Artist of the Year award or the Album of the Year award this year, and Joohoney hoped to have their all of the songs from their album line up on the music charts. Hyungwon said, “I want to perform at a large venue with more fans. I hope we’ll succeed even more with the support of our fans so that they can have more fun as they cheer for us.”

Meanwhile, MONSTA X’s new album “Take.2: We Are Here” and the music video for the title track “Alligator” will be out on February 18 at 6 p.m. KST. Check out the teasers here!