For now, we’ll be focusing on the questions surrounding their career and past!

When thinking about the things that inspired their music, surprisingly, they didn’t respond with any other artists or genres. After some thought, they shared that their biggest inspirations are movies, their fans, and their own lives.

Considering MONSTA X’s music videos are so cinematic and personal, that makes a lot of sense!

While all of the members sat in thought for a long time, Minhyuk immediately had an answer that they all could agree on, “All In.”

“All In” was the first installment of their THE CLAN series, and it does indeed play out a lot like a movie. As Minhyuk said, it also has an interesting use of color as the video is quite dull but occasionally has vibrant pops of color.

Like many K-Pop idols, MONSTA X started out by watching their seniors perform when they were younger. Soon, they began to dream about becoming just like them. They said that “there’s a lot of very cool, great people” in the industry. 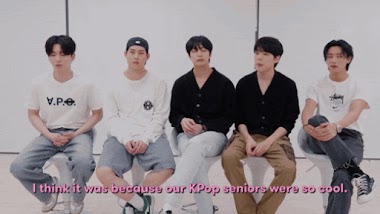 They all chimed in and shared that it was, in fact, because the groups looked so cool.

MONSTA X debuted back in 2015, and K-Pop has rapidly changed since then. The biggest change they revealed was that K-Pop became a big deal later in their career.

Minhyuk: “I think what Joohoney said is right. K-Pop wasn’t really known, but know it has become a genre and there’s definitely a fandom too. 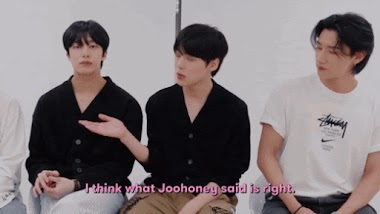 Joohoney finished by surprising some of the members by saying that there is actually a specific K-Pop category on many music platforms.

You can watch the full video below!