The MONSTA X members are full of praise and gratitude for one another.

On October 25, MONSTA X guested on MBC’s “Idol Radio.” During the broadcast, I.M was asked to share a particular story. He called up Shownu to join him on the platform and shared, “Recently, I’ve begun to compliment Shownu a lot. At first, he said, ‘Thanks,’ and I don’t know if he just got used to it or what, but now he ignores me.” The other members jokingly added, “Yeah, that’s worth being sad over.”

In response, Shownu remarked, “If I hear, ‘You’re really handsome’ once or twice, I can say, ‘Thanks.’ But when we film our music video, or do a photo shoot for our album jacket, or anything, I.M will say, ‘You’re good looking, you’re good looking.’ So I can’t seem to keep saying, ‘Thanks.’” He added, “I’m always thankful. I have a tendency to just say ‘Yeah, I’m handsome’ [to I.M’s compliments], but in the future I’ll make sure to say [‘Thank you’].” 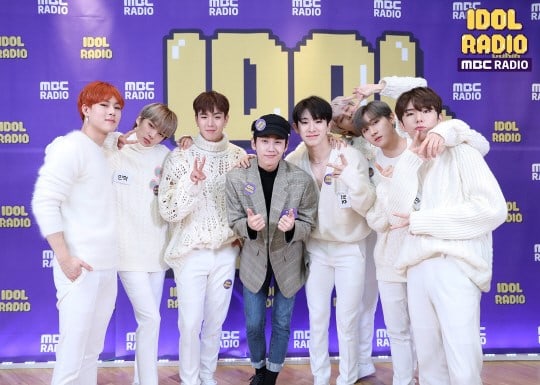 The members also shared other behind-the-scenes stories about each other. Jooheon shared and expressed his thanks that whenever he fell asleep on airplanes, Hyungwon would always flatten the seat for him.

Shownu joked about the physical affection between Jooheon and Minhyuk, to which Jooheon made everyone laugh by saying, “It’s our way of expressing affection.” Hyungwon and Kihyun, who are known in the group for placing importance on manners, also performed a skit on the proper way to greet someone.

MONSTA X recently made a comeback with their newest album “Take.1: Are You There?” and its title track “Shoot Out.”