Na Eun continued to show her charms on KBS 2TV’s “The Return of Superman.”

On September 2, Na Eun greeted viewers with her adorable bed hair and surprised viewers by eating a bowl of natto for breakfast.

After breakfast, Na Eun went to her closet and picked out her own outfit as usual. She got dressed in a princess dress and sang the “Frozen” OST “Let It Go” while dancing around the house.

The father-daughter-son trio set off for a trip to Ulsan. On the bus, the family sat next to three Spanish-speaking tourists. When they asked Na Eun questions, she understood them and responded in Spanish.

Na Eun’s father and soccer player Park Joo Ho said, “I don’t know any Spanish. I knew that Na Eun spoke Spanish with her grandmother, so I knew she was good at it. But it’s been quite a while since she’s lived apart from her grandmother. I was proud of her for not forgetting Spanish.”

They soon arrived at Ganjeolgot, which is famous for being the first place where the sun rises. Na Eun got to speak with her mom on the phone, with both the mother and daughter speaking to each other in German.

After 48 hours of being with their dad, the two children finally reunited with their mom. The family members showered one another with kisses and hugs, and Park Joo Ho said that he learned a lot from this experience. 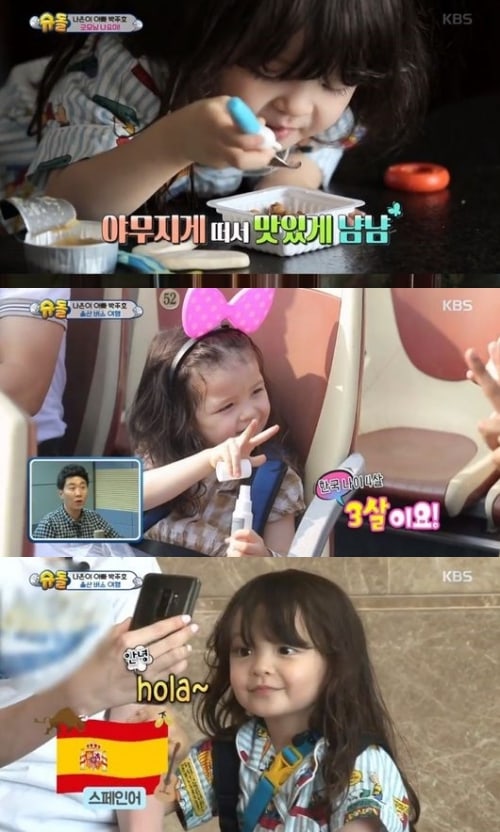 “The Return of Superman” airs on Sundays at 4:50 p.m. KST. Check out the latest episode below!