NCT 127 brought the laughs as they made their first appearance on a radio show as a complete group.

The idol group appeared on SBS LoveFM’s “Song Eun Yi and Kim Sook’s Unni’s Radio” on April 9 to talk about a variety of topics. When asked if it was really their first time on a radio show as a complete group, the members explained, “It’s cool to see Haechan on a radio show. He wasn’t able to appear on radio shows in the past because he’s underage, which means he isn’t allowed to be working after 10 p.m. KST.” Haechan was able to appear on “Unni’s Radio” as it airs during the day.

Everyone laughed when Haechan said, “When the others were on a radio show, I’d usually just sleep,” before he wistfully added, “I was actually really envious of them.” 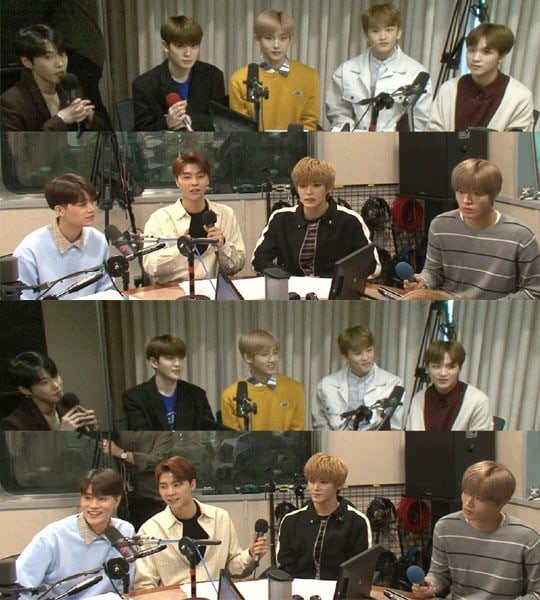 The members kept playfully teasing Haechan throughout the show, and they also turned their sights on Mark, as they are both in more than one NCT unit. Mark, who is in NCT 127, NCT Dream, and NCT U, was unable to answer when he was asked, “Do you prefer NCT 127 or NCT Dream?” Haechan came in to save the day as he wisely answered, “I like both.”

Explaining the differences between NCT 127 and NCT Dream, Haechan said, “I like NCT 127 because everyone is older than me so I can rely on them, and I like NCT Dream because it’s also fun to be with members who are my age.”

When asked if he ever feels a generational gap with the other members of NCT 127, Haechan said, “Because I’m younger, I’m able to pick up on slang words and I teach them to the others.” He then jokingly teased Taeil, the oldest member of the group as he added, “But I think Taeil is too behind the times, even for his age.”