NCT Dream Tells Stories From Their “We Go Up” Comeback

On September 3, NCT Dream held a V Live broadcast to talk about their new mini album.

Mark began, “We prepared the live broadcast to celebrate our comeback. We’re going to talk about the new album, MV, and comeback promotions during the broadcast, so I hope many of you will tune in.” Jaemin shared that they’d also prepared missions for the show.

NCT Dream started by updating fans on what they’ve been up to. Talking about the web drama “A-Teen” which Jaemin and Jeno appeared in, Mark said, “It may be because they’re my members, but I cringed when I watched it for the first time.” Jeno made others laugh when he commented, “I haven’t watched a full version yet.”

The members also spoke about their comeback stage for “We Go Up.” Chenle said, “We performed and promoted for the first time in a while, so I was satisfied.” Jeno added, “The light sticks that the fans were holding were so pretty.” Mark commented, “We ended our first week of promotions, but each and every day was so fun. I also really liked hearing the fan chant while performing ‘We Go Up.’”

Speaking about their two year anniversary in June, Haechan said, “We did many things during the two years, but I think I’ll remember today the most.” Jeno added, “Our debut was unforgettable.” 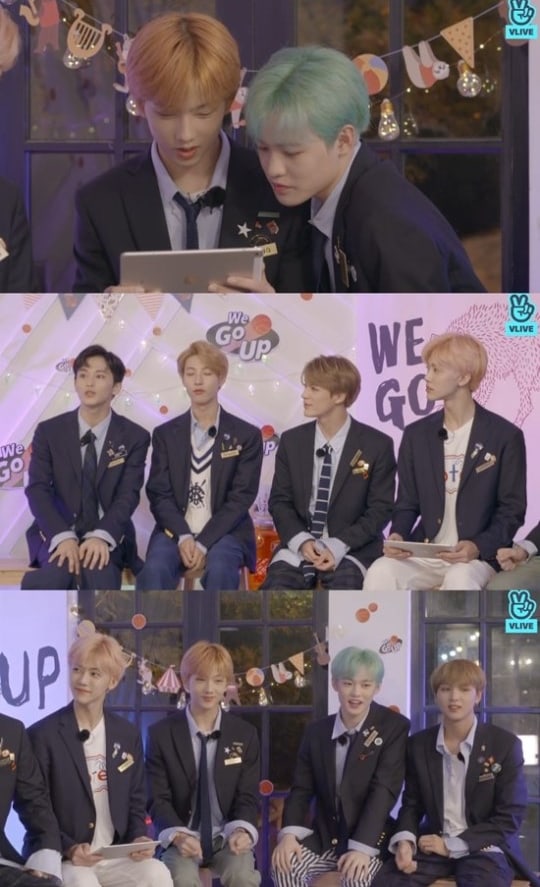 NCT Dream then listened to and described each of their six new tracks. About their title track “We Go Up,” Jeno said, “It’s in the lyrics as well, but it’s about finishing this stage and moving forward to the next stage. It’s a title track that shows our growth.”

The members also shared fun stories from preparing their mini album. They said that as soon as Haechan said, “Whoever gets it wrong has to buy drinks,” he got it wrong first. Haechan explained, “I missed it while thinking, ‘You can’t get it wrong’ and got it wrong.”

After choosing their favorite parts and most difficult parts, NCT Dream read comments from their fans and did an event for them.

They concluded the broadcast with a sweet message to their fans. Jeno said, “We’ll finish our remaining promotions with energy. I love you.” Renjun stated, “We showed our passionate energy. I think it’s really good and I hope you’ll receive that energy. We’ll work hard to promote ‘We Go Up,’ so I hope the fans will also receive that passion and gain energy.”

Mark concluded, “It was fun doing a broadcast for the celebration of ‘We Go Up.’ I hope we can make many happy, fun memories during promotions.”

NCT Dream released their second mini album “Go Up” on September 3. Check out the MV for their title track “We Go Up” here!