NCT‘s Chenle is a DJ for the radio show Akdong Seoul on TBS eFM 101.3MHz, and his guest for today’s episode was WayV! He said that this was the most guests he’s had on the program.

WayV promoted their new EP, Kick Back – The 3rd Mini Album. Chenle even danced to the title track with them!

chenle danced to kick back together with yangyang~ pic.twitter.com/JOLHCTQYZR

A listener asked the WayV members to share their first impressions of Chenle. Yangyang recalled having recently joined SM Entertainment around the time of NCT Dream’s “My First And Last” era. He said both Chenle’s hairstyle and walking were unique. 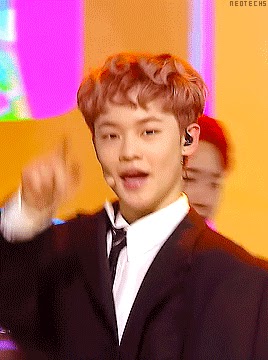 He remembered Chenle walking into the practice room, and Yangyang thought, “Who is this?” Yangyang even tried to imitate the walking style, but Chenle couldn’t believe he ever did that! Chenle asked, “When was I like that?!” YangYang retorted and told him that that was exactly how he walked back then!

Ten couldn’t remember his exact first impression of Chenle, but he remembered seeing a pre-debut photo on the internet. Ten said, “I first saw Chenle in a picture, like a picture when he was very small. He sat in a sofa with his legs crossed and his hands on top of his legs.” Just from the childhood photos, Ten could see that the kid had a lot of potential.

after seeing one of these predebut pictures of chenle, he thought "oh he's talented" pic.twitter.com/0xXBpV3xHO

The pictures came to mind for each WayV member. They even attempted to imitate the iconic pose!

After all this teasing and harassment, who knows if Chenle will ever have the WayV members back on his show.

Yuedong Seoul airs from 9 pm to 10 pm KST. The show is live-streamed on the official TBS eFM 101.3MHz YouTube channel.