On April 10’s episode of “On Air NCT Show,” the members of SM Entertainment’s new group NCT U talk about their second oldest member, Taeyong.

The guys say that he’s very clean and organized, and joke that he might be a bit too obsessed with cleanliness. Mark also reveals that Taeyong often does his own laundry by hand because he’s afraid that the colors will blend in the washing machine with his fellow members’ clothing.

The members all agree that one of his good points is that he is great at giving advice about life, and Jaehyun says he’ll sometimes buy them food and give them advice over the meal.

Later on, host Heechul of Super Junior asks the guys if Taeyong has any bad points. Jaehyun replies, “I don’t think there are any,” and Heechul jokes, “Are you joking? Think harder.”

Jaehyun says that sometimes his advice goes on for too long, which cracks everyone up because his good point has become his bad point. Fellow members Ten and Doyoung agree that he can sometimes seem to be nagging them. 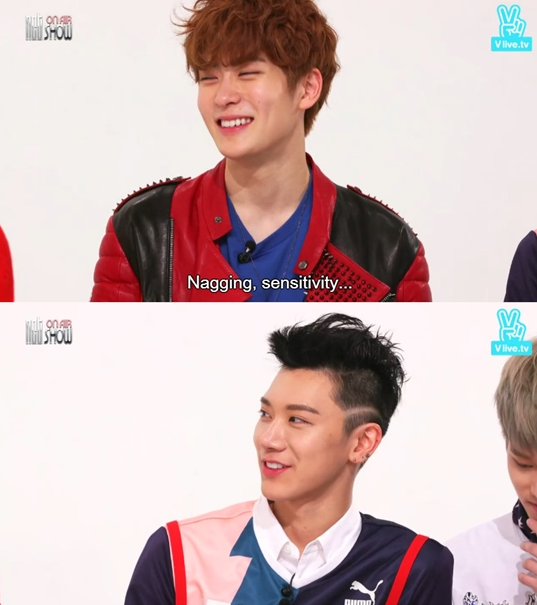 To explain why he tends to nag the other members more than even their manager, Taeyong says, “I made a lot of mistakes by doing the wrong things when I was young. I hope that my dongsaengs and all my beloved members won’t make the same mistakes as me.”

Taeyong was previously surrounded by controversy when it was revealed prior to his debut that he had staged scams on online trading sites when he was in middle school. Taeyong adds on the show, “I want to talk to my members a lot about the things that I know, so that they won’t become like I was.”

Heechul also jokes, “I think Jaehyun, Ten, and Doyoung are going to be nagged by Taeyong after this.”

Meanwhile, the guys previously talked about member Jaehyun in detail on April 9’s episode. Watch more of NCT U in April 10’s episode of “On Air NCT Show”!