A new TikTok challenge has been making headlines in Korea, but it’s for all the wrong reasons. A Korean netizen uploaded a post on an online community where they expressed their concerns for an alleged TikTok challenge. They shared a gif of the challenge, which shows a Caucasian female going up to an unknown Korean male and embracing him without warning. The man looks visibly taken aback, as he puts his hands up and away from the woman’s body. 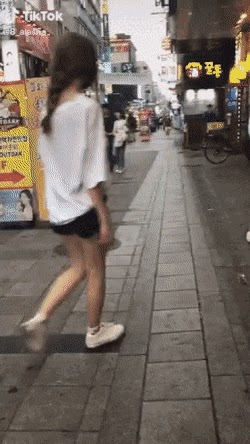 In these close-up photos of the said challenge, viewers can see the female going in for the hug, at which the man dips his body back in an effort to dodge her embrace.

As the woman maintains her hug, the man looks directly at the person behind the camera looking visibly confused and distraught.

Even until the very end of the “challenge,” the man refused to reciprocate the hug, as he keeps his hands away from her body.

This post garnered heavy attention and has been making headlines on numerous different media sites. Netizens chimed in with their personal thoughts, with the overall consensus being that this “challenge” crossed a line and that it may be sexual harassment.

The original TikTok user has since deleted the clip in question and no traces of the video can be found on her TikTok account.